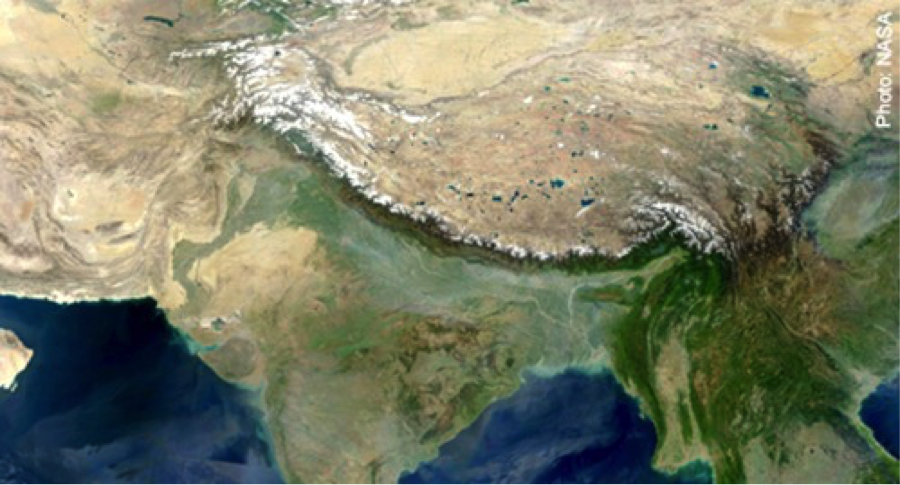 The Himalayas, known as the “abode of snow” in Sanskrit, span portions of India, Pakistan, Afghanistan, China, Bhutan, Nepal and Tibet. Parallel mountain ranges spread continuously for 1,500 miles (2,400 km), while the total area covered by the Himalayas is 230,000 square miles (595,000 square km). Mt. Everest, or Sagarmatha, translated as the “Goddess of the Universe” or “Forehead of the Sky,” towers at 29,029 ft. (8,484 m) above Nepal and Tibet, forming the highest peak on Earth. An additional 110 peaks break above 24,000 feet. These towering peaks create a barrier between the Plateau of Tibet to the north and the alluvial plains of the Indian subcontinent to the south.

Tectonic plate collisions between India and Tibet formed the Himalayas between 40 and 50 million years ago. The “abode of snow” is among the youngest mountain ranges worldwide, especially compared to older ranges such as the Appalachians. The Himalayas continue to grow by more than 1 cm per year, as continental plates continue their collision course. Weathering and erosion offset this growth, but the continued plate convergence creates frequent earthquakes and tremors.

In addition to the beauty of the towering peaks, the Himalayan mountain ranges provide a critical water supply for billions of people throughout Asia. Rivers that stem from the Himalayas include the Yangtze Ganga-Brahmaputra, Ganges, Indus, Yarlung, Yangtze, Yellow, Mekong, and Nujiang. Besides Antarctica and the Artic, the largest deposits of ice and snow exist in the Himalayas, giving the region the nickname the “third pole.” The largest glacier within the Himalayas is the Siachen Glacier, which measures nearly 50 miles in length. India also contains one of the largest and most extensive alluvial plains in the world, known as the Indo-Gangetic-Brahmaputra Plain. The unique and varied geography of the region contributes to the remarkable biodiversity and high levels of endemism.

The ecology of the Himalayan region transforms as elevation increases. Tropical and subtropical broadleaf forests are found at the base of the mountains. Because of variation in topography, weather, soils, and rainfall, these forests range from dry tropical evergreen to northern wet tropical forests. This tropical region is also home to endemic wildlife, including Asian elephants, tigers, and hundreds of bird species. With further increases in elevation, tropical forests give way to temperate broadleaf mixed forests. Monsoons contribute substantial rainfall to these forests, supporting the growth of orchids, lichen, and ferns amidst a dominant canopy of oak (Quercus) and maple (Acer). Wildlife abounds within these forests, including golden langur monkeys and hundreds of bird species, many of which are endemic to the region.

Forests dominated by conifers such as pine (Pinus), hemlock (Tsuga), spruce (Picea) and fir (Abies) are found above the broadleaf forests. For coniferous species located within mountain valleys, surrounding peaks provide some protection from harsh conditions, albeit growing conditions remain difficult. Red pandas, takins and musk deer occupy this region. Once beyond the tree line there is incredible biodiversity within the montane grass and shrub lands. Montane grass and shrub lands generally occur at the highest livable plant zone, which is marked by intense winter temperatures but mild summer conditions. Alpine meadows with seasonally blooming flowers occupy the highest region above rhododendron and other comparable shrubs. Wildlife at this high elevation includes snow leopards, Himalayan tahr, musk deer and pikas.

Some of the most common natural disturbance regimes for the forest regions of the Himalayas include glacial activity (most recently glacial retreat), floods, avalanches, rock falls, and earthquakes. The Hindu Kush region of Afghanistan is especially active and prone to earthquakes. Steep slopes throughout the region amplify the results of tectonic activity and earthquakes, often producing landslides. A tragic history of devastating earthquakes pervades the region, such as one that killed an estimated 10,000 people in northeast India and Nepal in 1934. Human activity both mitigates, as well as exacerbates, some of the disturbance regimes and subsequent impacts.

Deforestation, dam building, and urbanization are the leading anthropogenic disturbance factors. Fuelwood harvesting and intensive grazing, especially from goats, expedites the loss of forest cover. This loss leads to greater erosion and flooding. Increasing dam construction to address rising energy needs will alter the landscape. Pakistan, India, Nepal and Bhutan, for example, are planning hundreds of dam constructions aiming for over 150,000 megawatts of added capacity over the next twenty years. River diversions, flooding, degradation of fish habitat, and potential dam failures from increases in glacial melt all present challenges to building additional hydroelectric capacity.

The Himalayas are one of the most distinctive regions on the planet. From the tallest peaks and active tectonics to a variety of ecosystem and endemic species, the impressive geology of the region is coupled with remarkable biodiversity. The confluence of multiple nations in the Himalayas adds layers of social and cultural diversity. Visit our pages below as we explore the questions of how to meet growing population and resource needs within this highly unique region, specifically regarding the use, role, and importance of forests.

Andrews, U. of S. (2016). Natural Hazards in the Himalayas: Glaciers and Earthquakes. Retrieved April 7, 2016, from https://www.st-andrews.ac.uk/~dib2/asia/glaciers.html