About 25% of the world’s forests are in the temperate biome. The northern boundary meets the boreal region in an irregular pattern at about 50–55°N. The temperate forest within this zone includes large areas of North America, Europe, and Asia. In North America, there is a broad swath of temperate forest in the east, and a narrower area in the west limited by tall mountain ranges close to the Pacific coast. The interior of the continent consists of prairies, steppes, and mountains. Similarly in Eurasia, a large area of temperate forest covers much of Europe in the west and northeast China, Japan, and Korea in the east, with a vast 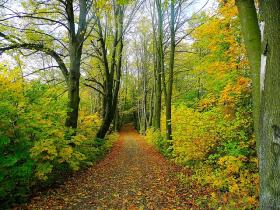 non-forested region in the center of the continent. There is comparatively much less temperate forest in the Southern Hemisphere, simply because the southern continents barely extend below the 30°S parallel, where climates are suitable for temperate forest vegetation. However, there are some temperate forest regions in southeast Australia (including Tasmania), in New Zealand, on the west coast of Chile, on the east coast of Argentina, and in Southern Africa. 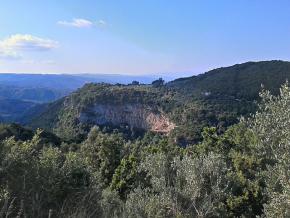 origin). The principal species are hard pines, spruce (Picea), fir (Abies), poplar and aspen (Populus) and larch (Larix). These interior mountain forests are located east of the coastal mountain chain of the U.S. and Canada, and also in Central Asia; they are closely related to interior continental boreal forests in species and forest structure. Montane oak-pine forests in the mountain ranges of Mexico, Central America, the Himalayas, the Mediterranean region, and Turkey are characterized by a diversity of hard pine and evergreen oak species. This forest type can be considered a variant of the interior coniferous forests, with the montane oak-pine type being lower in latitude, warmer, and drier.

Woodland and pineland forests are located in dry, southern temperate climates, mostly on low elevations along coasts. They include hard pines and oaks in the coastal Mediterranean region and in low elevation areas of Mexico, as well as the savannas of Southern Africa and Australia that are dominated by Acacia and Eucalyptus species.

Temperate rainforests are moist, mesic forests that grow on mountain ranges, usually along western coasts where westerly winds bring high precipitation. Annual rainfall can be greater than 2,000 mm, with year-round precipitation, or with somewhat  drier summers. These temperate rainforests include the Pacific Northwest coast of the U.S. and Canada, with the main species being spruce, hemlock, fir, Douglas-fir (Pseudotsuga) and western red cedar (Thuja); the southwest coastal fringe of Chile and Tierra del Fuego, Argentina, with southern beech (Nothofagus); and New Zealand and southeast Australia, with southern beech, eucalyptus, and podocarps (Podocarpus).

Temperate forests now cover about 1.04 billion ha, with current forested area estimated to be 40–50% of the original extent. Most of the forest loss occurred in Europe, where many countries had lost more than 90% of their forest cover by the late medieval period, and China, followed by eastern North America. Historically, temperate forests have been exploited for timber and charcoal, cleared for agriculture and development, and otherwise heavily impacted by humans. Many countries have experienced a generalized pattern of forest decline and recovery, but this recovery rarely reaches more than 50% of the original forest area. Currently, the overall temperate forest area is fairly stable at 25% of the global forest. Most countries in Europe and the temperate region of China have increasing forest cover, while Australia and North Korea are losing forest cover, and the United States, Japan, South Korea, and New Zealand are stable.