Although much publicity regarding deforestation drivers is focused on land use activities such as farming or logging, such activities are made possible by infrastructure, such as roads for transportation. The expansion of road networks in ecologically sensitive areas like the Amazon Basin or the Indo-Malayan tropical forests of Southeast Asia has increased deforestation. One study showed that 94.9 percent of deforestation occurs within 5 km of a road or navigable river.

Roads have a relatively small impact on forest cover, but the development of roads contributes to habitat fragmentation, and increased mortality of animal

populations due to loss of habitat or collision with vehicles. The separation of populations has an effect on animal behavior, as well as implications for genetic flows. Means of mitigating  adverse effects of roads on animals include creating overpasses, tunnels, or other wildlife corridors. Roads also have significant biophysical impacts, such as dust production, which has been shown to  negatively impact vegetation growth and animal population movement. The increased sediment deposition from roads can lead to physical alterations of aquatic ecosystems.Roads also have effects on hydrologic cycles by increasing water runoff and reducing evapotranspiration, leading to increased erosion, reduced percolation and aquifer recharge rates, and increased peak dischargelevels and frequency of downstream flooding. Transportation and use of chemical products on roads also increases pollution from herbicides, chemical fertilizers, deicing salt and heavy metals (e.g. lead, zinc, nickel) into roadside environments. 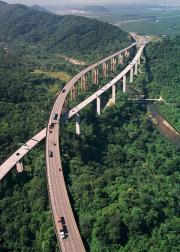 Transportation networks also facilitate deforestation and forest degradation by increasing access to more remote areas and allowing for less costly harvesting or clearing of forestland. Some studies suggest that the indirect impacts of logging on forest health may be greater than the direct logging of forests, due to the increased populations that accompany road expansion from logging operations. The expansion of rural communities facilitates the conversion of logged forestland or standing stock into pasture, cropland, or shifting cultivation fields, as the cost of migration to remote areas is reduced. Increased access to markets also creates incentives to engage in commercial agriculture or forestry.

The environmental impact of roads can be mitigated by careful evaluation of logging or mining concessions. Road developments that avoid riparian areas and narrow floodplains help to reduce sediment deposition in aquatic ecosystems, as well as ecological road design that incorporates slope, soil, and hydrology to facilitate aquifer recharge and reduce soil erosion. In developing countries, roads continue to encroach on protected areas and national parks, due to poor governance and population pressures. Increased monitoring capacity through technologies like satellite imaging may facilitate the more environmentally sensitive expansion of transportation networks.

Read through the following pages to learn more about roads in the Amazon Basin and the Congo Basin.