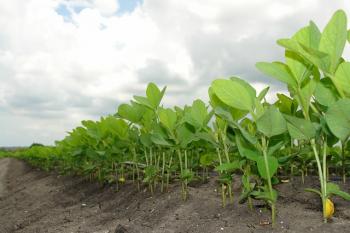 Soybeans are the seed of a legume (Glycine max) native to East Asia, and have historically been an important source of protein and oil. Large industrial farms dominate the soy production process today. Currently, the largest soy producing countries are the USA, Brazil and Argentina, comprising 80% of the global soy production of 270 million tonnes annually. Soybean meal has become a predominant feedstock for poultry and livestock, accounting for 67% of consumption of global soy production. Most soybean meal is exported to Europe where it is turned into animal feed, while the majority of whole soybeans and soybean oil are exported to China for human consumption. Consumption in China has doubled from 26.7 million tonnes in 2000 to 55 million tonnes in 2009, and demand is predicted to continue rising. Due to the large international demand and corresponding high prices, the global soy harvest increased by 10% each year from 1989 to 1998.

Across the whole of South America, production grew by 123% between 1996 and 2004, and soy production continues to increase in Bolivia and Uruguay. In the 2000s, soy production, in combination with cattle ranching, has resulted in high rates of deforestation in the Brazilian Amazon, which reached an average rate of 1,950,000 ha cleared per year from 1996 to 2005. Forestland is generally first cleared for cattle ranching, and pastures are in turn replaced by soy farms. Some analysts theorize that the expansion of soy farms onto degraded or cleared forestland may displace pastures into forested areas, indirectly driving further deforestation. Though rates of deforestation in the Amazon peaked in 2003 and have declined dramatically as a result of increased government regulation, forest clearing for agricultural development continues in the Amazon basin, the Cerrado woodlands, and the Atlantic forest. Other forest regions such as the Chiquitano dry forests in Bolivia are also at risk of deforestation, and the Gran Chaco savannahs of Argentina and Paraguay are subject to other impacts such as soil erosion and water pollution due to the spread of soy cultivation.

In the continental United States, land converted to soy production has been primarily from pre-existing agricultural land and has little effect on forests. However, between 2001 and 2010, 410,000 ha of grassland were converted to soy production. Beyond environmental degradation, the spread of industrial soy farms displaces rural farmers and indigenous communities, and facilitates exploitative labor arrangements. Large plantations will continue to be dominant producers in

the soy industry, due to their economies of scale. With demand for soy products predicted to increase in China and emerging markets in Africa and the Middle East, combined with the increasing usage of soybean oil in biodiesels, soy production will most likely continue to increase well into the future. As such, tropical forests in Latin America and Southeast Asia are at risk of increased deforestation. Read further to learn about the impacts of soy cultivation in the Amazon Basin.

Fearnside, Philip M. (2001). Soybean cultivation as a threat to the environment in Brazil. Environmental Conservation 28(1), 23-38.

WWF. (2014, May). Soy Report Card 2014: Assessing the use of responsible soy for animal feed in Europe. World Wide Fund for Nature.