Animal husbandry is an integral part of human history, with peoples around the world domesticating animals from sheep to cattle to alpacas, and making use of various animal products. The movement of populations from rural to urban environments and increases in household income has led to increased consumption of meat. Approximately 57 million tons of beef are produced each year globally. Due to rising demand, livestock farming has become extremely resource-intensive, by virtue of large herd sizes, which require large amounts of feedstock or grazing pastures, water, and medicines. Studies have shown how long term grazing contributes to soil erosion and thus reduced fertility and carbon sequestration capacity of the soil, especially in regards to industrial scale feedlot systems and ranching operations. 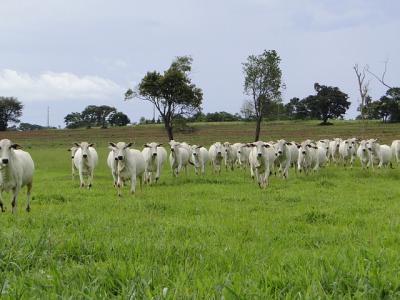 In many areas of the tropics, especially the Amazon basin, cattle ranching is preferred to crop cultivation. In areas of poor soil fertility, crop yields drop after just a few cycles, while cattle ranching can continue for many years. In remote areas of the Amazon, cattle ranching requires less capital and labor input; clearing land for pasture is also used to stake tenure claim to land. In the Brazilian Amazon, ranches are often large and held by a smaller number of wealthy landowners. Ranching often follows initial forest clearing for timber; high grade timber is removed and remaining slash is burned in order to stimulate soil fertility. In South America, cattle-ranching has contributed to heavy deforestation in the Amazon, as forests are cleared to create pastureland. For example, cattle herds in the Amazon increased by 140% during the period between 1990 and 2003, leading to record levels of deforestation during the same time period - annual deforestation rates peaked in 2003, after which the Brazilian government implemented policies restricting illegal clearing of forests.

Feedlots in North America and other regions require large amounts of feedstock such as corn or soybean, which in turn requires large amounts of land area to grow. One kilogram of beef requires 15,000 liters of water to produce, taking into account the amount of water used to grow and process crops into feedstock, as well as to process meat. Cattle also produce large amounts of methane, contributing to greenhouse gas emissions. Animal husbandry’s contribution to greenhouse gas emissions is further exacerbated if forests are converted into pasture or cropland for feedstock. Even after abandonment of pastures, intensive grazing can degrade the land such that forests do not regenerate. In other cases, invasive grasses that are spread with cattle ranching can remain after pasture abandonment, preventing forest regeneration.

Cattle ranching and beef production directly impacts the physical environment through the leaching of nutrients from eroded soil or pollution from pesticides and herbicides. In 2003, the number of cattle in tropical countries surpassed the number of cattle in non-tropical countries. Due to the range of impacts that cattle can have on the environment, scientists recommend  less land-intensive cattle raising via the fortification of feedstock with nutrient-rich food byproducts. Some studies have suggested that traditional systems, such as silvopastoral systems, are characterized by lower methane emissions for the amount of beef produced, as compared to intensive feedlot operations. Click here to find out more about the impact of cattle herding in the Amazon Basin.

Hinrichs, C. C., & Welsh, R. (2003). The effects of the industrialization of US livestock agriculture on promoting sustainable production practices. Agriculture and Human Values, 20(2), 125-141.