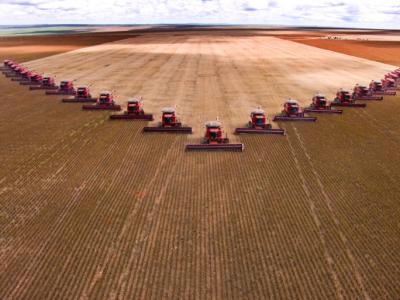 Industrial or intensive agriculture is distinguished from traditional agriculture by a high ratio of inputs to land area, and is also characterized by a reduction in fallow periods, in order to maximize crop yields. Over the past 50 years, increased usage of chemical fertilizers, irrigation systems, pesticides, and mechanized technologies has doubled agricultural productivity. This rapid increase in food production has allowed for reduction in malnutrition rates around the world, despite a doubling of the world’s population in the same amount of time. However, more and more resources are required to sustain agricultural systems that are capable of supporting the consumption rates of industrialized countries, as well as the burgeoning populations of developing countries. Crops like rice, maize, and wheat have historically dominated global agricultural production, with monocultures being the typical form of production by the end of the 20th century. This trend of agricultural intensification has resulted in the reduction of the biodiversity of natural ecosystems and the loss of habitats for terrestrial and aquatic animal species.

Conversion of forest to intensive agriculture can have profound impacts on forest health. Monoculture plantings will quickly exhaust the thin layer of nutrients in tropical soils. Runoff from agricultural land often contains elevated nutrient levels and can cause problems with water pollution. Large farms provide little wildlife habitat and can contain almost zero plants in the understory. Fragmentation from farms can have negative impacts on surrounding forests by isolating animal populations and altering microclimates at forest edges. In Brazil, forest clearing for intensive agriculture normally involves larger clearings than pasture. Finally, farm biomass and soil sequesters a fraction of the carbon as forests.

Read through the following pages on Cattle, Palm Oil, Soy, & Biofuels to learn more about the specific agricultural products and commodities that are driving deforestation around the world.

Altieri, M. A. (2009). The ecological impacts of large-scale agrofuel monoculture production systems in the Americas. Bulletin of Science, Technology & Society,29(3), 236-244.

Lawrence, Deborah, et al. (2010). Untangling a decline in tropical forest resilience: Constraints on the sustainability of shifting cultivation across the globe. Biotropica 42.1: 21-30.

Tilman, D. (1999). Global environmental impacts of agricultural expansion: the need for sustainable and efficient practices. Proceedings of the National Academy of Sciences, 96(11), 5995-6000.