Home » Land Use » Historical Land Use

While the concept of forests may bring to mind ideas of “pristine” or “untouched” wilderness, many if not most of the world’s forests have been shaped and influenced by patterns of human activity, settlement, land use and land abandonment over time. These processes have occurred at different scales, rates and times throughout history. For instance much of Europe and Asia were settled millennia ago, whereas human occupation of Americas was much more recent. 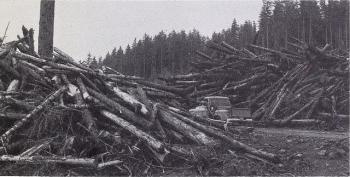 Throughout history and today populations have relied on forest resources, such as timber and charcoal, for economic development, and converted forests in order to use the land for agriculture, mineral extraction, and cities. Writers, historians, and scientists have remarked a distinct linkage between the rise and fall of civilizations, with the depletion and subsequent regeneration of forests throughout history around the world. While human settlement often meant deforestation due to land conversion, occurrences such as wars, plagues, population movement and climate changes could cause agricultural abandonment, over time leaving forests to naturally regenerate.  For instance, throughout history, an estimated 99% of temperate forests have been logged, converted to agriculture, grazed or fragmented by development. Despite their history of being severely impacted by human presence, temperate forests have shown to be largely resilient and due to their ability to re-establish following land abandonment, second growth forests now cover about 40-50% of the temperate forest biome.

Policy, governance, and global resource demand throughout history and today have impacted where and how forests have been used, converted, or protected, such as in the case of protected areas, preventing human interaction with forests, or global demand for agricultural commodities helping to push the conversion of forestland to agricultural land.

Read more about land-use and the history of human settlement in the Amazon and the Congo Basin.

Perlin, J. (1989). A forest journey: the role of wood in the development of civilization. New York: W.W. Norton.