Logging is the process of cutting and processing trees to produce timber and pulp to supply the world’s markets for furniture, construction, paper, and other 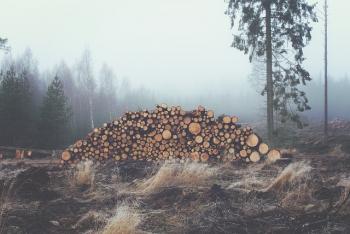 products. The practice of logging ranges from large-scale commercial timber plantations to individuals harvesting fuelwood. While logging is important to regional economies and rural communities, if not managed properly, it can contribute to deforestation and forest degradation. As logging intensity (measured by m3 of industrial roundwood equivalent per hectare) increases, overall animal species richness tends to decline, though the effects on a particular species will differ, depending on the species’ environmental niche and its adaptability to environmental disturbances. Habitat loss is one of the greatest threats to biodiversity, especially in tropical rainforests where over 50% of all of the world’s documented animal and plant species are found. Logging also directly impacts soil and hydrological cycles, as the reduction in tree cover leads to increases in water runoff and soil erosion. At the macro level, deforestation by logging results in a reduction of carbon sequestration capacity, which in turn contributes to climate change. Deforestation from logging and timber conversion in the tropics accounts for approximately 15% of global greenhouse gas emissions annually.

The ecological impacts of logging depend on the type of logging or harvesting involved, and what purpose the logging is for. For instance, logging may take place to make room for infrastructure or plantation development, and the forest will be clearcut. Another example would be the selective logging of high-value timber species for commercial purposes. When considering timber plantations or managed forests, the type of harvesting and silviculture practices used are also relevant. 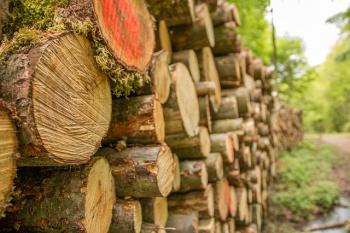 Deforestation from clearcut logging is highly disruptive to biodiversity, whereas the effects of selective logging are less definitive. Due to the removal of seed sources, clearcut logging prevents the natural regrowth of endemic species. However, clearcut logging of natural forests in the tropics also occurs when farmers and ranchers are expanding cropland and pastures, and is not used as a means for sustained timber harvesting. With selective logging, only high-value species are felled for timber, but many smaller trees are damaged in the process. Selective logging also contributes to large scale forest fragmentation, altering forest micro-climates and making forests more vulnerable to fires, as well as affecting plant and animal species composition. The development of transportation infrastructure for logging also increases the degree of forest fragmentation, and allows for easier access to unlogged forests. When considering the impacts of logging, the impacts on natural forests are necessarily different from the impact on planted forests that are actively managed through silviculture. Poor harvesting and silviculture practices may lead to long term declines in timber yields and regeneration capacity, due to adverse effects on soil quality, as well as making planted forests more vulnerable to fires or disease.

In 2010, the global total for reported wood removal was 3.4 billion m3, which does not take into account the amount of wood removed illegally (which is unreported). According to the FAO’s State of the World’s Forests Report in 2011, the amount of sawn logs removed was 853 million m3, pulpwood amounted to 527 m3, while other industrial roundwood amounted to 157 million m3. Energy wood and household fuelwood accounted for 1.87 billion m3.

The demand for wood and paper products is expected to increase as developing countries industrialize, which will only put more pressure on forest ecosystems. Significant expansion in the adoption of sustainable forest management techniques and proper forest governance will likely be needed to ensure that forest commodities can be sustainably harvested. This includes improved forest products certification, forest law enforcement and monitoring, and community forestry efforts. Explore further to learn more about commercial logging, illegal logging, small scale and traditional logging, and logging conservation practices. Read through to learn more about region-specific logging and associated issues in the Amazon Basin, the Congo Basin, the boreal, and the northern Pacific temperate rainforests.

Johns, A. D. (1992). Vertebrate responses to selective logging: Implications for the design of logging systems. Philosophical Transactions of the Royal Society of London B: Biological Sciences, 335(1275), 437-442.