Forests have been an important source of energy throughout human history. Traditional forms of forest biofuel include firewood and charcoal for heating and cooking, which it is still used in many parts of Africa, Latin America, and Asia. Forest bioenergy can also include wood residues from the timber harvest and the forest processing industry, such as wood pellets, black liquor (a byproduct of pulp production), or recovered wood waste. Today wood fuel, charcoal, and wood pellets are the most significant types of forest bioenergy being produced and consumed around the globe, and are discussed in greater detail below.

Wood fuel & wood charcoal: Today, more than two billion people depend on wood fuel or charcoal for cooking and heating, and in some parts of Africa wood fuels still account for up to 90 percent of energy consumption. Wood fuel is also relatively important in the Asia-Pacific region as well as Latin America, where wood fuel production accounts for 64 percent and 54 percent of annual roundwood production (wood or timber harvested), respectively. In the year 2014, total global wood fuel production was 1,864 million m³, including 53 million tons of wood charcoal.

Wood fuel harvesting has been linked to deforestation, although there are debates as to the level to which it exacerbates deforestation rates. In many places, wood used for fuel is deadwood collected from the forest (and therefore doesn’t require removal of standing trees) and some recent research has shown that fuelwood consumption is not often a driver of large-scale deforestation, although there are also cases where live cutting for fuelwood occurs as well. However in some places wood fuel extraction and deforestation can lead to resource depletion on a local scale and have led to shortages in areas where rates of extraction outstrip supply. Despite not necessarily causing wide-scale deforestation, wood fuel harvesting can contribute to forest degradation and have negative impacts on forest health and biodiversity, due to chronic removal of small trees or branches over time, including removal of habitat for cavity-dwelling animals and saproxylic species (those that rely on dead wood for survival), and disruption of nutrient recycling processes. Beyond impacts on biodiversity, reliance on wood fuel for cooking has negative impacts for poor households, who are more likely to depend on wood fuel for household energy needs, and may spend up to 10% of their income on fuel, and suffer from health problems due to smoke exposure (when cooking is done indoors over open fires). 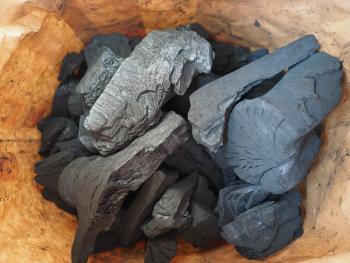 Charcoal is fuel produced by the carbonization of biomass (namely wood). Production is most significant in Africa and Latin America regions, where production has increased over the last 5 years, (compared to other regions where production has remained relatively low and unchanged). The drivers of charcoal consumption in these two regions differ however; Africa’s charcoal consumption stems mainly from urban demand for cooking fuel, while in Latin America, Brazil’s steel industry is the main consumer of charcoal. The carbonization of wood into charcoal most commonly occurs in traditional earth kilns, although other types of kilns (such as brick or metal) do exist and are in use.

Residual Forest Biomass/thinning: Compared to wood fuel and charcoal consumption, which has remained relatively stable on a global level, the use of wood pellets for energy has seen a dramatic increase in recent years (in 2014 global production grew by 17 percent). Wood pellets consist of wood particles compressed into small cylinders for use as burning fuel. Due to their density (which is about 2 to 3 times that of softwood), pellets burn cleaner and more uniformly per unit volume. Today wood pellets have a range of uses, from home heating to large-scale industrial power generation. While wood pellets have been used for decades, some of the recent increase in demand can be attributed to bioenergy targets under the European Union’s “Renewable Energy Directive,” which requires the EU to fulfill at least 20% of its total energy requirements with renewables by 2020. The largest producers of wood pellets in 2014 included the USA, Germany, Canada, Sweden, and Latvia, who together accounted for over half of global production of wood pellets. Of these five, only the USA is also one of the largest consumers of wood pellets. Other countries that are among the top consumers and importers of wood pellets are the UK, Denmark, Italy, Sweden, the Republic of Korea and Belgium. 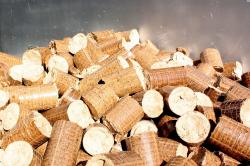 The source of biomass for wood pellets can come from timber (trees harvested specifically for the purpose of manufacturing wood pellets), logging residues (portions of harvested trees that are not utilized for saw-timber, such as tops, branches, and leaves), or mill residues (such as sawdust, woodchips or wood shavings that are a by-product of wood processing in sawmills). The levels to which these various sources are used depend on a variety of factors including levels of supply and demand, policy and harvesting regulations, as well as market conditions. Of the various sources, logging and mill residues are limited, in that their production is limited by the degree to which wood is also harvested and processed for other uses, such as saw timber.

Biomass harvesting offers potential for increased efficiency of revenues for land-owners due to sale of logging residues in addition to saw timber, although there is some concern that timber harvesting for biomass or use of logging residues for wood pellet production may have negative implications for forest ecology and future sustainability. Due to the removal of woody debris, which under traditional harvest systems is mostly left behind, there is potential for impacts such as reduction in ecosystem carbon storage, nutrient pool reduction, as well as overall landscape productivity and levels of biodiversity.

Read more about forest bioenergy in the Congo.

Chidumayo, E.N. & D.J. Gumbo. (2013). The environmental impacts of charcoal production in tropical ecosystems of the world: A synthesis. Energy for Sustainable Development. 7: 86-94.