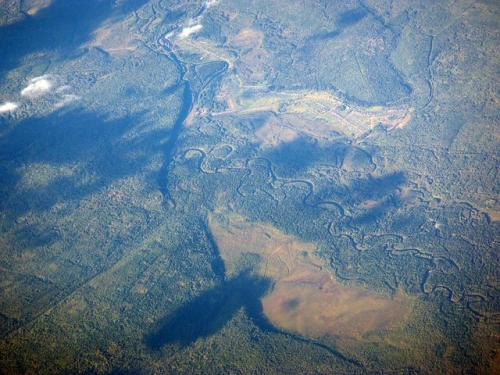 The Boreal or “Taiga” forests are defined as an ecoregion by the World Wildlife fund for Nature, and make up the forested regions of the Boreal biome. The Boreal biome is governed by latitude (50-60° N) and climate, and boreal forests are characterized by their low temperatures and their location in a circumpolar belt circling the globe.

The Boreal region is made up largely of coniferous forests, although areas of mixed and broadleaf forest also exist. Areas of wetlands, bogs, and other hydrological features are also prominent within these forests. The regions and countries containing the boreal also consist of areas of tundra, polar “deserts”- treeless ecosystems of patchy vegetation, dominated by heaths and sedges, found generally to the North. At the Southern reaches of Boreal forests, the landscape transitions into temperate rainforest, deciduous temperate forests and grasslands.

Precipitation can range from 40 to 100 centimeters per year, and as a whole, the ecoregion is characterized and shaped by long severe winters and short summers. The boreal can be divided into two general ecozones based on geography, the Nearctic (North America) and Palearctic (consisting of Eurasia and Northern Asia) boreal forest, as classified by WWF. The Boreal can also be divided into maritime boreal and interior continental boreal, a classification with more marked ecological differences between the two zones. The interior continental boreal is characterized by a more extreme, dry climate, and is more vulnerable to periodic disturbances, mainly large fires or insect outbreaks. The maritime boreal has a more moderated climate, and the main disturbances are insects and harvesting. Explore and learn more about ecoregions, governance, land and forest use in the boreal here: