Palm Oil in the Congo Basin 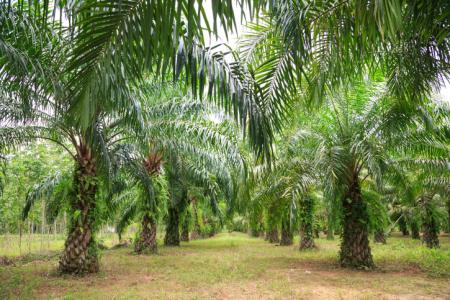 Intensive agriculture in the Congo basin is rare, as forests are largely intact and transportation infrastructure is undeveloped. In recent years following the financial crises and food crisis of 2007-2008 however, agricultural investment in Africa has skyrocketed. In light of these events, international investors and food insecure countries of south Asia and the Middle East increasingly view agricultural land as a profitable and strategic investment. At least 18 million hectares of land transactions have occurred in recent years in sub-Saharan Africa, centered in Ghana, Ethiopia, Mozambique, and Zambia. The principal land use of these transaction has been biofuels; in semi-arid areas, jatropha is the most common crop, whereas palm oil is common in wetter areas. However, jatropha yields have often failed to meet targets, and as roads are expanding in the Congo basin, palm oil investment is growing as well.

Palm oil is native to the African rainforests, and Nigeria has traditionally been a producer of oil palm, but in recent decades, Indonesia and Malaysia have come to dominate the international market. Palm oil is used for cooking oil, especially in India and China, as well as biofuel and numerous other food ingredients in Europe and around the world. It is a very lucrative crop, and produces more oil per hectare than any other oil crop in the world. As climatic conditions in central Africa are favorable, land prices are low, and export markets in Europe are relatively close, developers are looking to expand production in the continent. Recent investigation by Greenpeace found 2.6 million hectares of land across central and western Africa that are either designated or under current oil palm cultivation. Countries with the most land acquired for oil palm are Liberia, Sierra Leone, and the Republic of Congo, and growing rapidly in Cameroon.

Palm oil development creates numerous risks for forests and forest communities of the Congo basin. As the crop needs humid conditions, the forested regions of the basin are often the primary targets for cultivation. Palm oil plantations harbor merely a fraction of the biodiversity of a mature rainforest, as well as ¼ to 1/3 of the carbon. And while palm oil cultivation can provide jobs and national income, it also displaces local communities and traditional ways of life. In the forested areas of the Congo basin, much land is held by customary rights; that is, inhabited by traditional peoples but without clear legal land tenure (government recognition of customary rights varies greatly between countries). In situations such as these it is often easy for plantation developers to enter and lease land from the government without consulting or providing compensation for local peoples.

One particular project is the 60,000 hectare Herakles plantation, adjacent to Korup National Park in Cameroon. Although the project developers plan to provide a charity for social ventures, the plantation is criticized for its clearing of intact forest, impact on migration corridors, and contribution towards increased bushmeat hunting. The project has been opposed by Greenpeace, the Oakland Institute, and SAVE Wildlife Conservation Fund, and was temporarily suspended in 2013 by the Cameroon Ministry of Forestry after Herakles refused to participate in the roundtable on sustainable palm oil standards. In November 2013 a smaller, 20,000 ha version of the project was granted final approval by the president of Cameroon.  Other large oil palm projects include the 470,000 ha lease for the Atama Plantation in the northern Republic of Congo, and a 52,000 ha lease for Olam Palm in Gabon (in addition to a large forestry concession).

The Herakles palm oil plantation, planned by a US company in the rainforest area of southwestern Cameroon, has been a lightning rod for environmental criticism. Read an article in Yale e360 and a recent update in Mongabay.