Mining in the Congo Basin 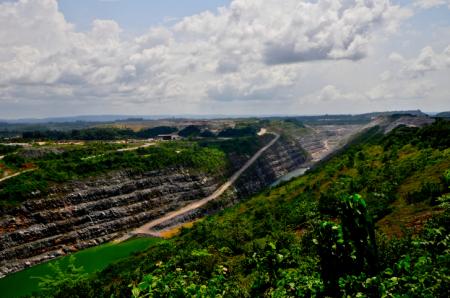 Mining is an important land use activity in the forested region of the Congo basin, employing millions of people in the informal sector, and in the past few decades surpassing timber as the largest economic activity. Gold, diamonds, cobalt, copper and oil are major resources that are mined from the region; most mining is small scale, artisanal, and unregulated. Recently, mining groups have targeted coltan and cassiterite, rare minerals used in electronics such as mobile phones.

Oil and mineral exploitation often occurs in the forested areas of the Congo basin, clearing roads and encouraging settlement and deforestation. However, oil and mineral activity also may discourage deforestation by making agricultural export less profitable and by pulling rural populations into cities and away from forested areas, as witnessed in Gabon and Republic of Congo. In an oil concession in Gabon, forests are well protected and hunting is not permitted.

Much of central Africa’s mineral exploitation falls under what has been termed blood diamonds or more broadly, conflict resources. Conflict associated with mining in the eastern Kivu region of DRC led the country’s government to ban export in 2010, but soon reversed amidst criticism that the decree further worsened the situation by contributing to illegal trade. In 2013, the DRC banned the export of raw concentrate mining materials in an effort to promote local value added processing.

Internationally, many countries and advocacy groups have established policies to ensure transparency in the mineral trade. Following outcry over the trade in blood diamonds, many purchasers created regulations to prevent conflict diamonds in the supply chain. The Kimberly process was created as a certification scheme by the UN in 2003, but has recently been criticized for its ineffectiveness. Other minerals such as gold are harder to track, and trade in these valuable resources has facilitated conflict in the region. In 2010, a US law was enacted to require firms to audit their mineral supply chain; a 2014 study found that the law and independent auditing efforts have led to a significant improvement in the mineral trade. Groups such as the Extractive Industries Transparency Initiative work to improve governance in the mineral trade.

As infrastructure expands through the Congo basin, new mineral projects are planned for the region. The WRI - Global Forest Watch atlas shows mineral concessions in the countries of the Congo Basin.  WWF has investigated the role of Chinese investment in the infrastructure and mining sectors in the Congo basin. In northern Gabon, controversy surrounds the Belinga iron ore mine, planned inside the Ivindo National Park; in 2014 the project was still under negotiation and the Gabon government was still looking for partners. In the Virunga National Park in the montane forests of eastern DRC, planned oil exploration had been the subject of intense controversy for several years. The park is home to an estimated one quarter of all the world’s critically endangered mountain gorillas; in June 2014, under pressure from park advocate WWF, British oil company Soco agreed to halt drilling plans.

The Guardian. (2014). The Kimberley Process is a ‘perfect cover story’ for blood diamonds. Retrieved from www.theguardian.com/sustainable-business/diamonds-blood-kimberley-proces…

Mining - Where is it?

The Interactive maps from the WRI - Global Forest Watch atlas shows mineral concessions in the countries of the Congo Basin.