Home » Tropical Zone » The Congo Forest » Land Use and Agriculture

Land Use and Agriculture in the Congo Basin 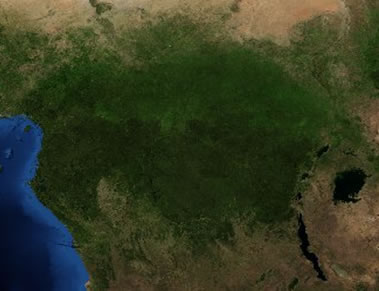 The Congo Basin forests are inhabited by 30-70 million people, many of whom are dependent upon forests for firewood, hunting and shifting cultivation. Amongst the countries of the Congo basin, approximately 59% of the population is rural. Most sources describe the Congo basin to include 530 million hectares of land and 200-300 million in forest, depending on the definition of forest / woodland.

Of the forest land, 44 million hectares (8%) is in logging concession. Of this figure, approximately 15 million ha in the DRC are in forest concession, 14 million in Gabon, and 8 million in Cameroon (see more at WRI – Congo Basin Forest Atlases). Agricultural land is difficult to define in the Congo basin, where native peoples practice shifting cultivation and small scale agriculture across the forested landscape. The UN estimates 10% of the DRC and the Central African Republic are agricultural land; 20% for Gabon and Cameroon, and 30% for the Republic of Congo.

A recent deforestation study calculated the average deforestation rate in the moist tropical forest of Central Africa to be 2.5% from 2000 to 2012, or average annual rate of 0.2%, much lower than that of surrounding dry forest countries of Africa or countries of the Amazon basin. Interestingly, these figures are quite different from some of the FAO reported deforestation figures for Central Africa; deforestation in Cameroon for example is listed at 1.02% and 1.07% for 2000-2005 and 2005-2010, but only 0.08-0.10% by Hansen et al. In many countries of the Congo basin, urbanization is increasing rapidly, partially due to growth in the oil and mineral sector, reducing pressure on native forests. Studies have shown that deforestation in the Congo basin is significantly higher near roads, urban areas, and areas of high rural population.

Read about the different land uses in the Congo basin – 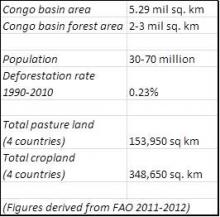