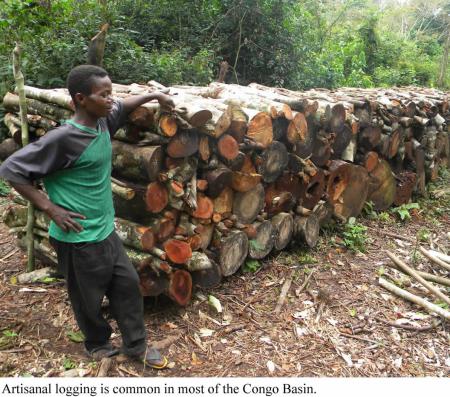 In the Congo basin, industrial logging concessions cover about 44-60 million hectares of forest (of the 200-300 million hectares of total forest area, depending on the classification). Most countries of the Congo Basin have most of their forest land governed under some form of forest management, with the exception of DRC, due to its vast size and weak history of governance.

Forest land in the Congo Basin is typically owned by the state. Most countries of the Congo basin created forest codes in the 1990s, which grant logging concessions (usually of more than 15 years) to private companies. Upon award of a contract, concessions holders usually have three years to submit a management plan. However, while the national governments are required to create technical standards, enforce regulations, and monitor compliance, many governments lack the necessary human or financial resources.

Many of the older concession holders, usually in Cameroon, Gabon, and Republic of Congo, are foreign owned, while many of the newer concessions are local. Local logging companies mostly supply local markets, whereas foreign companies, especially in Gabon, export logs for processing and consumption. The export market has traditionally been focused in Europe, but is recently growing in Asia.

The forestry sector is well developed in Cameroon, Gabon, and Republic of Congo, where it contributes 3-6% of national GDP, whereas it is undeveloped in the DRC. Similarly, total log production is nearly twice as high in the smaller countries of Cameroon and Gabon as it is in the DRC, due to the difference in infrastructure, capital investment, and rural violence. Most countries in the Congo Basin have restrictions stating that a maximum of 15-30% of total logs can be exported, while Gabon and Equatorial Guinea completely ban log exports. Across the region, forest production as a whole is significantly lower than other regions of the world, but has high levels of illegal activity.

In response to civil war and governance challenges, in 2002 the DRC government issued a moratorium on new concessions and abrogated approximately half of previously issued contracts. The new code distinguishes different forest users, and classifies private loggers as industrial loggers with concessions and artisanal loggers without concessions. However, the forest code does not have a clear mechanism for managing artisanal logging, and loggers often purchase cutting rights from community leaders without formal legal processes or involvement of the entire community.

The World Bank states that much of the logging in the Congo Basin is sustainable and does not lead to deforestation.  In the DRC, they argue that more than half (25.6 million hectares) of the forest concessions are under state approved management plans. Many studies confirm that selective logging practiced in the Congo basin does not create a significant impact on total forest cover and species richness, however, other ecological effects include change in tree species composition and impacts on wildlife. Organizations such as CIFOR work to facilitate sustainable forestry operations so that they can conserve forest cover and contribute to REDD+ targets. CIFOR has also published several reports about the importance of the informal logging sector in Central Africa (see more on the Reduced Impact Logging page).

In countries of the Congo basin where logging concessions have been in place since the 1990s, NGOs collaborate with governments and concession holders to sustainably manage landscapes, such as the such as the Ndoki region of the Republic of Congo. Studies find that logging concessions can provide valuable wildlife habitat if they are combined with forest reserves and where logging roads and settlements are minimized. Satellite mapping can monitor logging development and building of logging roads, an important contributor to forest degradation and fragmentation. In the basin, Gabon has the most developed network of logging roads, while the northern Republic of Congo is undergoing rapid development.

Greenpeace. (2007). Carving up the Congo. Retrieved from http://www.greenpeace.org.uk/media/reports/carving-up-the-congo