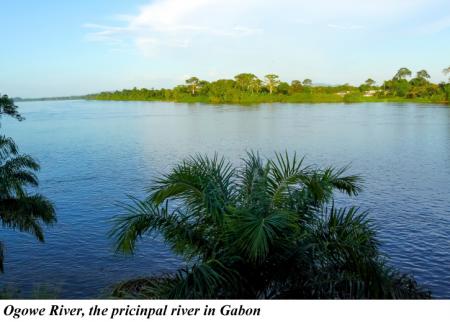 Gabon is one of the smallest and least populous countries of Africa, but retains a large area of African rainforest. Most of the population of 1.5 million are urban (in the capital of Libreville), approximately 85 of the forest area remains, and deforestation rates are around 0.1% annually (FAO 2010). Of the 22-23 million hectares of forest area, about 4 million are protected areas and 14 million are allocated for forestry. Gabon is also an oil exporter (located offshore), and has one of the highest GDP per capita in Africa.

Located on the Gulf of Guinea of the Atlantic coast, forestry has traditionally been an important industry in Gabon; for centuries, logs of Aucoumea klaineana (okoumé) were exported to Europe. Since independence, Gabon has largely been ruled by one man, Omar Bongo, from 1967 until his death in 200. Thanks to oil wealth, Bongo was able to maintain peace and assert his power; France still supports Gabon, and holds a military base and significant investment in the country. Despite oil wealth however, most of Gabon remains poor. Even with the discovery of oil, timber export has been a large but vulnerable sector of the economy; in the 1990s Gabon became reliant on export markets in China and East Asia, but was hit hard by the Asian economic crisis of 1997. Structural reforms were imposed by the World Bank and the IMF, limiting the role of state enterprises. Gabon’s forestry sector fared better in the economic crisis of 2008 than other countries of the region due to the strong demand for okoumé wood in emerging markets. In 2010, Gabon banned log exports in an attempt to promote value added log processing. Although log processing has increased, the log ban has shifted raw log export into neighboring Republic of Congo and Cameroon. 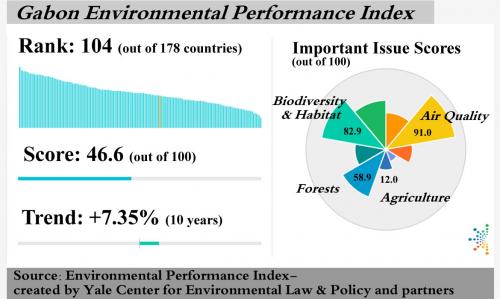 A limited forestry law was introduced in 1982, but following forestry and environmental reforms of the 1990s, the current forestry law was established in 2001. The new law mandates forestry concessions for 20-40 years and requires a sustainable forest management plan. Reforms also promoted enhanced conservation value of forests and decentralization to favor local management, but some groups criticized these steps as slow to develop. Much of the capital in forestry is foreign, and most concession area is held by just a few companies. In 2007 the government began a program to facilitate small-scale forestry permits and train small holders in mapping and creation of management plans. Recently, groups such as the World Resources Institute have worked to improve transparency and data collection and sharing in the forest sector. Gabon is also working to develop a Voluntary Partnership Agreement with the European Union to comply with forest legality verification; they are currently in the negotiations phase. Some forest operations in Gabon move beyond legality verification and participate in certification programs such as FSC and PEFC. A recent study found that wildlife management improved in FSC certified concessions in central Gabon. Gabon also participates in REDD+; they are a member of UN-REDD and the World Bank’s Forest Carbon Partnership Facility, although they are still in the process of creating their readiness proposal.

Forest conservation in Gabon was made famous in 1999-2000 by the “megatransect” expedition by Michael Fay of the Wildlife Conservation Society, where the biologist hiked through hundreds of miles of Congo basin rainforest to survey plants and attract attention to the conservation value of the region. In 2002, with the support of WCS and other NGOs, Gabon established numerous national parks and protected areas.

Logging Off. (n.d.) FLEGT in Gabon. Retrieved July 17, 2014 from http://loggingoff.info/process/flegt-gabon

PEFC. (2011). FLEGT and Certification Workshop in Gabon. Retrieved from http://pefc.org/news-a-media/general-sfm-news/794-

Quammen, D. (2000). A conservationist sets out to survey 1,200 miles (2,000 kilometers) of African jungle the old-fashioned way—on foot—in the first of a three-part series of articles. National Geographic. Retrieved from http://ngm.nationalgeographic.com/ngm/0010/feature1/ 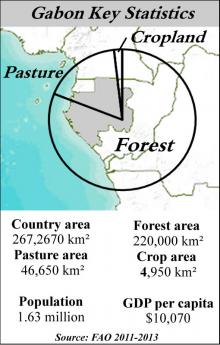