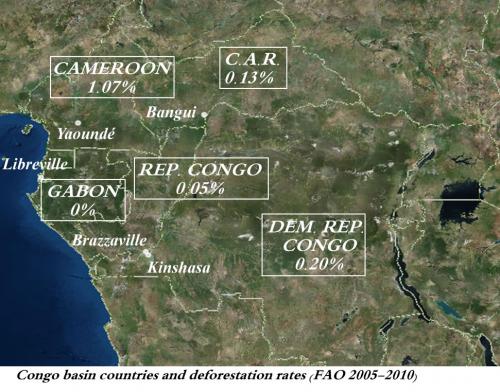 Decades of violent conflict and weak governance have hurt the countries of the Congo basin. Genocide in the 1990s in Rwanda created regional instability in the Afromontane region of eastern DRC (known as Zaire from 1971 to 1997). Turmoil in the DRC in the late 1990’s led to a major regional conflict, often known as the Great War of Africa. Opposing the DRC was Rwanda and Uganda, while DRC supporters included Zimbabwe, Angola, Namibia, and several other African countries. Although a peace treaty was signed in 2003, violence has continued, especially in the northeastern DRC.

In the forests of the Congo basin, conflict has discouraged the investment in agriculture and infrastructure seen in other areas such as the Amazon basin. Because of this, deforestation has remained relatively low in most countries of the Congo basin (see map graphic). With increased stability however, governments and investors are planning infrastructure and development. At the same time, conservation NGOs, donors, and local governments are working to improve forest governance, strengthen forest monitoring and protected areas, and implement conservation programs such as REDD+.

Forest land in the Congo Basin is typically owned by the state. Most countries of the Congo basin created forest codes in the 1990s, which grant logging concessions to private companies. However, while the national governments are required to create technical standards, enforce regulations, and monitor compliance, many governments lack the human or financial resources. The Congo basin countries have implemented various policies and governance and multilateral cooperation treaties that aim to improve forest management, biodiversity conservation and livelihoods.

COMIFAC was established in 2005 to act as a regional forum for the conservation and sustainable joint management of forest ecosystems in Central Africa. COMIFAC is the primary authority for decision-making and coordination of sub-regional activities, made up of forestry ministers of participating Central African countries. The Declaration/treaty recognizes the protection of the Congo Basin’s ecosystems as an integral component of the development process and reaffirms the signatories’ commitments to work cooperatively to promote the sustainable use of the Congo ecosystem. Since its formation, COMIFAC has met regularly to discuss its agenda and develop an official Plan de Convergence, an action plan that identifies COMIFAC priorities.

The CBFP is an association between multiple partners, including African countries, donor agencies, NGOs, scientific institutions and other organizations concerned with the Congo Basin. The CBFP was launched by US Secretary of State Colin Powell in 2002 as a non-binding partnership at the World Summit on Sustainable Development in Johannesburg. The partnership’s primary aim is to enhance natural resource management and improve the standard of living in the Congo Basin. The members of the CBFP recognize the COMIFAC as the central policy and decision-making body for conservation and management of Central African forests. The CBFP was initially facilitated by the U.S., later France and Germany, and currently Canada. Since the inception of the Partnership, the U.S. government has coordinated activities through CARPE, the Central Africa Regional Program for the Environment.

CEEAC was established in 1983, and includes most of the Congo Basin forest countries as well as Angola. CEEAC aims to achieve collective autonomy, raise the standard of living of its populations and maintain economic stability through cooperation, with an ultimate goal to establish a Central African common market. At the Malabo Conference in 1999, four priority fields for the organization were identified: (1) to develop capacities to maintain peace, security and stability, which are essential prerequisites for economic and social development; (2) to develop physical, economic and monetary integration; (3) to develop a culture of human integration [sic]; and (4) to establish an autonomous financing mechanism for ECCAS.

See the following pages to read about conservation policies, forest governance, and other issues in the countries of the Congo Basin.

The Central African Regional Program for the Environment (CARPE) is a regional USAID program began in the 1990s to assist forest governance, research and monitoring, and conservation in the Congo Basin. The CARPE program works with local governments to strengthen governance capacity and natural resource monitoring. Current work of the program focuses on climate change mitigation, payments for ecosystems services, and land use planning.