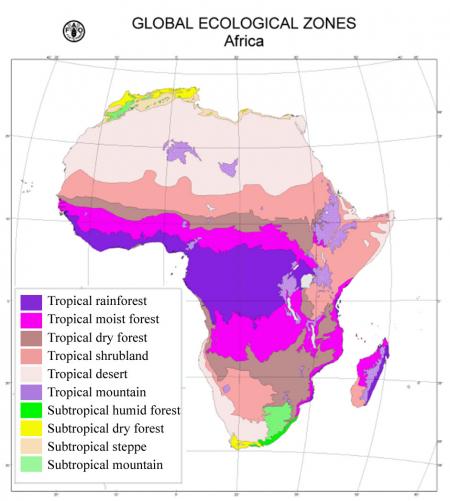 The FAO global ecological zones provide a general overview of the habitat types of Africa. The Congo Basin forms the tropical rainforest at the core of the continent; the smaller patches of tropical rainforest in West Africa are commonly known as the Guinean lowland forests.

Ecoregions or biomes are large geographic units that encompass areas of unique ecological characterisitcs, often of a similar forest or vegetation type. The World Wildlife Fund for Nature has developed a worldwide map of terrestrial ecoregions, classified into groups such as tropical broadleaf forest, temperate coniferous forest, or mangrove. See a description of this mapping tool online at WWF or published in BioScience 2001. In Africa, much of the vegetation and habitat descriptions are based on the work of biologist Frank White.

Similar to the Amazon Basin, the Congo Basin is comprised of a mosaic of ecoregions of lowland rainforest, coastal forest, and swamp forest. Sometimes the Congo Basin includes the forest – savannah ecoregions of Central African Rerpublic in the north and southern DRC and northern Angola in the south. Outside of the Congo basin to the north lie the Sudanean and Sahel grasslands, and to the south are the Miombo woodlands of Angola, Zambia, and Tanzania. Interestingly, the extent of the Congo basin ecoregions and unique sub-regions can be largely delineated by the distribution of two genera of begonia, Scutobegonia and Loasibegonia.