Traditional Land Use in the Congo Basin 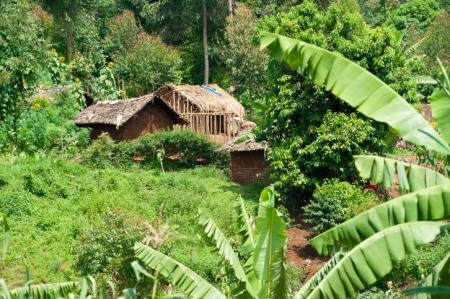 Various hunter-gatherer pygmy groups inhabit the forests of the Congo basin. Most of these groups live in close association with the agriculturists, trading foods, meats, and other products. Pygmy groups include the Baka – Aka of the Central African Republic – Republic of Congo area, the Bongo of Gabon, and the Mbuti of Ituri - northeastern DRC. The Mbuti have been studied frequently, and are observed to practice a mix of hunting-gathering along with consumption of food from neighboring villages. Two of the most common wild fruit and nut sources in the region are the trees of African mango (Irvingia gabonensis), and safou / butterfruit (Dacryodes edulis), and studies have found that local peoples have domesticated these species on several occasions. Other important food resources from forest include seeds from Ricinodendron heudelotii, Gilbertiodendron dewevrei, African oil palm (Elaeis guineensis), and the tubers of several species of wild yams. Read more about native fruits of the Congo Basin on the agroforestry page.

Also within the forested landscape of Central Africa, native populations have practiced shifting cultivation for thousands of years. Traditional smallholder agriculture is based on shifting cultivation, primarily of root crops such as cassava, yams, and cocoyam, trees of banana / plantain, and occasional ground nuts (Arachis hypogaea). Traditionally, farmers cleared an area of forest, cultivated for 2 years, allowed a fallow period of 5-20 years, depending on soil conditions, land availability, and various other factors, and returned to clear and cultivate again. Secondary forest is often dominated by regrowth of Musanga cecropiodes (related to the Cecropia pioneer trees of the Amazon Basin); shifting cultivation often targets these secondary forests because they are easier to clear than mature forest.  More recently, increasing populations and roads have encouraged more sedentary settlements and shorter fallow periods.

Significant debate surrounds the issue of the practice of hunter-gatherers in the Congo Basin, often termed the wild yam question, referring to yams, one the most vital wild food resource for these peoples. Some argue that native rainforest peoples could have subsisted for many years solely on hunting (mostly duikers) and gathering the wild yams (Dioscoreophyllum spp.), while others propose that rainforest food resources are scarce and hunter-gatherer peoples must have depended on agricultural food. Wild food resources are often more abundant in agriculturally derived secondary forests than in mature forest. A recent study of the Baka people in northwestern DRC – northeastern Cameroon found that they practice agriculture in the wet season and hunt / gather for several months during the dry season (December-February).