Home » Dams in the Congo Basin

Dams in the Congo Basin 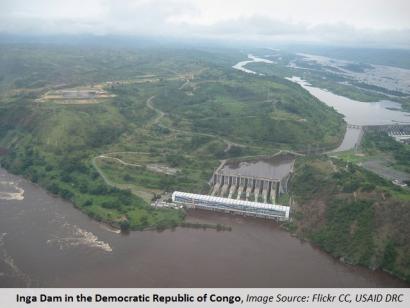 Roads, dams, and other forms of infrastructure play a significant role in the forests of the Congo basin by facilitating access for farmers and new forms of land use. Hydroelectic dams are a new and growing infrastructure investment with potential to transform the forests and economy of the Congo Basin. On the downstream reach of the Congo River southwest of Kinsasha, the proposed Inga Dam could become the largest hydro facility in the world, surpassing the Three Gorges dam when complete. Early dams at Inga Falls were built in the 1970s and 1980s but fell into disrepair. The new dams could generate thousands of megawatts in a poor country with little electricity, but the project has been criticized as much of the power will be destined for South Africa and mining operations. A treaty with South Africa was signed in 2013 and construction is planned to begin in 2015-2016; funders include the World Bank and the African Development Bank. The dam will flood a large area, interrupt the river ecosystem and prevent sediment transport, although the steep gradient of the river minimizes the overall displacement from flooding the reservoir. Read about more dams proposed in the Congo Basin at Yale e360 and International Rivers.