Collection of non timber forest products (NTFPs) such as fruits, nuts, and medicines differs from agroforestry in that NTFPs are more derived from natural forest ecosystems, whereas agroforestry systems are more human managed. NTFP harvest is often treated as a conservation strategy; bushmeat and fuelwood collection are both technically non timber forest products, but are frequently considered unsustainable.

Non timber forest products of the Congo Basin are important for forest residents as a source of food and medicine for family consumption, as well as commercial products. For many forest dependent people, trade of NTFPs represents an important source of cash in times of crises and as a gap-filler between seasons of crop harvest. Studies have found that in some provinces of Cameroon, two thirds of NTFP plant products are commercially traded, and that NTFP commerce equals approximately half of that of timber. However, it is important to note that as a means for rural livelihoods, bushmeat hunting, fishing, and fuelwood collection often contribute more cash to rural income than fruit and medicine NTFPs. 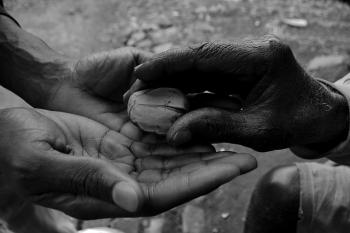 Forest products collected in the Congo Basin include many of the same fruits cultivated in agroforestry systems, such as bush mango (Irvingia spp.), African plum (Dacryodes edulis) and kola (Cola spp.). A product primarily harvested from wild sources is Gnetum, (G. africanum and G. buchholzianum), two gymnosperm lianas that grow in young and mature forest. Gnetum is traded internationally for nausea medicine and consumed in urban areas of Central Africa as a leaf vegetable. However, unlike the fruit tree species, Gentum is not easy to domesticate, and more prone to over exploitation. Medicinal forest products that are commercialized internationally include bark of African cherry (Prunus africana), native to various highland regions of Africa, including Cameroon and used to treat prostrate conditions, and bark of the Yohimbe tree (Pausinystalia johimbe), a member of the coffee family common to the coastal forests of Cameroon and Gabon, used as a fertility treatment. Fruits of the eta plant (Landolphia owariensis), a forest vine historically used for natural rubber during King Leopold’s rule in the late 1800s, are also collected from forests and planted in fields.

An important plant for building material is rattan, which comes from various members of the palm family; African members of this group include Calamus, 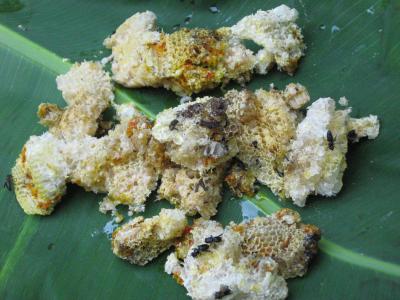 Eremospatha, and Laccosperma. Rattan palms are distributed across the rainforests of Central Africa, and grow in the understory of mature forest as well as in open gaps; their fruits are consumed and dispersed by hornbills and various primates. Read more about African rattan at FAO. Cane from the rattan plants is used for wicker furniture and baskets. Also a member of the palm family, various parts of Raphia palm trees are used in the Congo Basin for ropes, fibers, palm wine, and more. Finally, honey is an NTFP collected from wild bees throughout the Congo Basin.

Harvest and trade of non timber forest products normally requires permits; in Cameroon, permits are required from the Ministry of the Environment and limit the quantity of allowed harvest. In many situations, however, ministries lack the capacity and resources to monitor wild populations for sustainable populations. In the case of the medicinal bark of African cherry, the plant has been protected under CITES II listing since 1995, but recent concerns about continued over-harvest have heightened concern for this valuable species (see CITES).

These plants compose just a small number of plants used by local peoples in the Congo Basin. Studies have found that in many areas, several hundreds of species of plants are collected for food, medicine, and other uses.