Reduced Impact Logging in the Congo 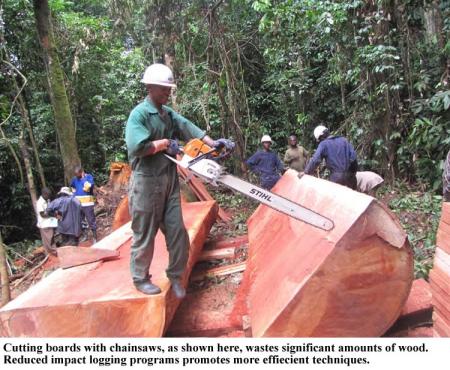 Logging is an important economic activity in the forests of the Congo basin, providing livelihoods for families and communities across the region. Sustainable logging techniques, often termed reduced impact logging (RIL), help loggers and forest communities to minimize the ecological impact of logging and maintain populations of commercial species for future harvest.

Conventional RIL techniques include forest reserve areas, use of management plans, logger training, and planning of logging operations, including felling trees, future crop trees, and logging roads. Additional techniques include pre-cutting of lianas and directional felling. In the Congo basin, average logging gaps are small, usually less than 0.1 hectare, and loggers remove just 1-2 trees per hectare. However, felling often damages surrounding trees, impacting as much as 10-20% of the trees of the harvest area. A study in a logging concession practicing RIL in Gabon found that just 11 trees were damaged for each felled tree. Combined with skid trails and roads, the study found that selective logging reduced  total forest biomass by just 8% (to 386 Mg/ ha). One study in Cameroon, however, found that liana cutting did not significantly reduce collateral tree damage and mortality from felling. However, a study in the same site found that this liana cutting will reduce future liana infestation in logging gaps, likely facilitating future regeneration.

Use of reduced impact logging techniques varies greatly in the forests of the Congo basin. A relatively large area of forest is designated as commercial logging concession (about 44-60 million hectares), and most of these require sustainable forest management plans. However, studies find that RIL are sparsely implemented, partially because sustainable forest management plans do not specifically address RIL techniques. Many concessions that export to Europe have adopted FSC certification; certification requires some RIL techniques such as management plans, road planning, and working training, but does not require other RIL techniques such as direction felling. One analysis of a sample of logging operations in the Congo basin found that road planning was implemented by 79% of concessions but that training of log skidder drivers was only implemented by 1/3 of operations. Few operations practiced multiple RIL techniques and directional felling.

Outside of concession, forest dwellers often practice informal logging, largely unregulated. In most countries, informal logging is more likely to occur in secondary forest areas closer to roads and rivers. In much of the Congo basin, reduced impact logging techniques are difficult to teach to local loggers because most of the logging industry is informal. In Cameroon, the most studied country, informal chainsaw logging is estimated to employ 45,000 people, about 3 times the number of jobs in the industrial forestry sector. Most operations costs go to paying wages, an important economic contribution in high poverty areas where more than half of the population lives below $2 / day. In most countries of the region, individuals from forest communities do not obtain logging titles or permissions from local government, due to logistical difficulties and transportation costs. Loggers in the informal sector often use less efficient chainsaw milling, wasting valuable wood. Moreover, informal logging deprives forest ministries of tax and permit revenue that could be used for monitoring and training. Read more about informal logging in Cameroon at CIFOR.

Lescuyer, G. et al. 2012. “An appraisal of chainsaw milling in the Congo basin. In The Forests of the Congo Basin - State of the Forest 2010, Eds: de Wasseige C., et al. Publications Office of the European Union. Luxembourg.p. 97-108.