It is projected that there will be a 1-2° C temperate increase from 1990 to 2050 in temperate forests. This is expected to have regional affects in precipitation patterns, up to a 20% increase or decrease in annual rainfall, with drier summers overall, drier winters in some areas and wetter winters in others. The expected shifts in temperature and weather patterns is predicted to have a number of impacts on the composition, health, and distribution of temperate forests. Overall, it is expected that the distribution of temperate forests will shift polewards, displacing boreal forests in some areas. Projections of longer and warmer growing seasons, and less extreme winters may increase the net productivity of temperate forests, but it is also possible that this effect will be offset by increased respiration of soil organisms or increased forest loss due disturbances. 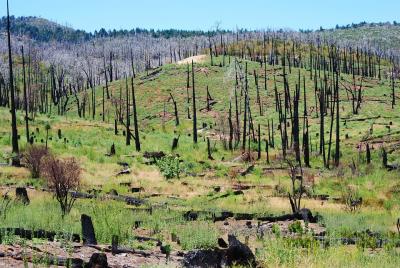 Forest disturbance processes expected to be affected or exacerbated by climate change include drought, insect outbreaks and fires. Higher temperatures are predicted to lead to warmer winters, meaning reduced regional snow packs which typically feed into water supplies for the following growing season. As such, summer water deficits may be higher, leading to drought and decline in health or growth of forest stands. Additionally, warmer winters may allow for greater reproduction and spread of insects and pathogens, further reducing growth in stands that are already affected by other impacts of climate change or pollution. Areas where forest management practices have led to monocultures or stands of a single species are especially vulnerable to such outbreaks. Disturbances expected to increase with climate change may also be interrelated, and increased prevalence of one disturbance type may increase probability of others, as tree health is diminished and as a result forests become increasingly susceptible to other disturbance events. For instance there is a predicted increase in forest fires in parts of the temperate zone, due to drought, but this is especially likely to occur where forests have been defoliated or killed due to pests, pathogens or drought.

Current and future interactions between temperate forests and climate change processes is a complex topic, due to the complexity of climate feedback systems and ecosystem processes. One such example of this is the impact of nitrogen deposition on forest productivity and carbon sequestration. 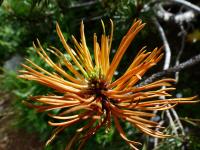 Nitrogen is often a limiting nutrient in temperate forests, and it is possible that nitrogen deposition from industrial and agricultural pollution and warmer temperatures will benefit forests currently limited by nitrogen, resulting in greater productivity and carbon sequestration.  Scientific evidence on the long-term impact of nitrogen deposition on temperate forests is mixed, however and after a certain level of nitrogen input, this benefit may be neutralized by heightened nutrient imbalance and soil acidification. Other potential impacts on forests may come from increased ozone (O3) which can cause foliar damage and reduce growth, especially among coniferous species, and it is predicted that 50% of temperate forests will be impacted by ozone damage by 2100.

While temperate forests are currently a carbon sink, their role in sequestering rather than emitting carbon is in a tenuous balance with a number of factors which could easily shift due to changes in patterns in disturbance, reforestation, age-class and successional patterns and potential additional effects from atmospheric carbon and nitrogen. There is also incomplete knowledge and need for additional research on mineral soil carbon stocks, global circulation and its regional impacts on temperate forest regions, and interactions between numerous environmental variables and carbon flow in temperate forest ecosystems.