Warming in the boreal and Arctic region is projected to be substantially above the global average, a trend consistent with both model projections and observations. According to the Intergovernmental Panel on Climate Change (IPCC), in the past 100 years temperatures in the Arctic have increased at twice the global rate. Boreal forests are expected to be especially sensitive and vulnerable to climate change because those ecosystems are naturally sensitive to warming, because of the nature of their soils (peat and permafrost are prevalent) and the likelihood of increased incidence and extent of fire. Additionally, boreal forests themselves have the ability to impact the global climate through radiation balance and carbon cycling, leading to interconnected feedback loops between climate and forest. 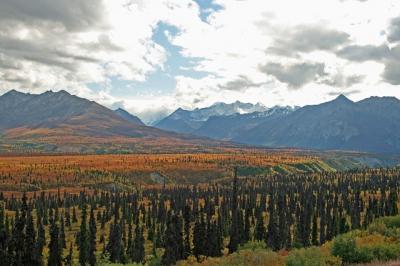 Ecosystem changes, such as earlier timing of events, such as migration and mating in animals, and blooming in plants, in addition to northward shifting ranges of plant and animal species have already been observed, and are expected to continue to occur. This can lead to new sets of species assemblages and ecosystems. For examples, trees may expand northward into tundra land, but die at the southern edge of their range due to high temperature or drought stress. Evergreen tree species may be replaced or out-competed by deciduous trees that can tolerate warmer climates. The rate of these range shifts depends on the growth and reproductive rate of the vegetation, and vegetation migration may lag behind warming for decades to a century. In many cases, warming is happening faster than vegetation can keep up.

Boreal forests also store large amounts of carbon in the soil. About 338 Pg (petagrams) of carbon is stored belowground in boreal forests, which is just about the same amount of carbon that tropical forests store aboveground in biomass. In some areas, the boreal forests grow on permafrost, which provides stability to the root systems of these trees and further traps the carbon in the soil. However, with warming in the boreal regions, much of this permafrost is melting or becoming more discontinuous, which affects tree stability and hydrology, and serves to release carbon and other potent greenhouse gases into the atmosphere. Some models suggest that boreal forests have become a net carbon source rather than a net carbon sink, due to permafrost thaw and changing disturbance regimes related to fire and insect outbreaks. However, trees in the boreal are continuing to accumulate carbon into their biomass even into old age, and if disturbed even more carbon will be lost to the atmosphere.

Climate change will also affect fire frequency and severity in the boreal, and there is evidence that these impacts have already begun. A New York Times article in May of 2016 reports that scientists recognize that climate change is to blame for the recent fires in Fort McMurray, Canada. With temperatures rising faster in boreal regions than elsewhere in the world, excessive heat along with earlier snow melt is creating the perfect desiccating conditions that spark massive wildfires. Canada is not alone in facing recent increases in devastating wildfires; Alaska had their second largest wildfire season ever recorded in 2015, and wildfires in Russia in 2012 burned an estimated 70 million acres. The situation is even more serious when considering the amount of carbon that is stored in boreal forests that is released as carbon dioxide as forests are destroyed. This carbon dioxide then contributes to more atmospheric warming, subsequently making wildfires and other effects of climate change even worse.