This part of the boreal, also referred to as the Eurasian boreal, stretches from Iceland to Eastern Russia, and is comprised of several distinct ecoregions. 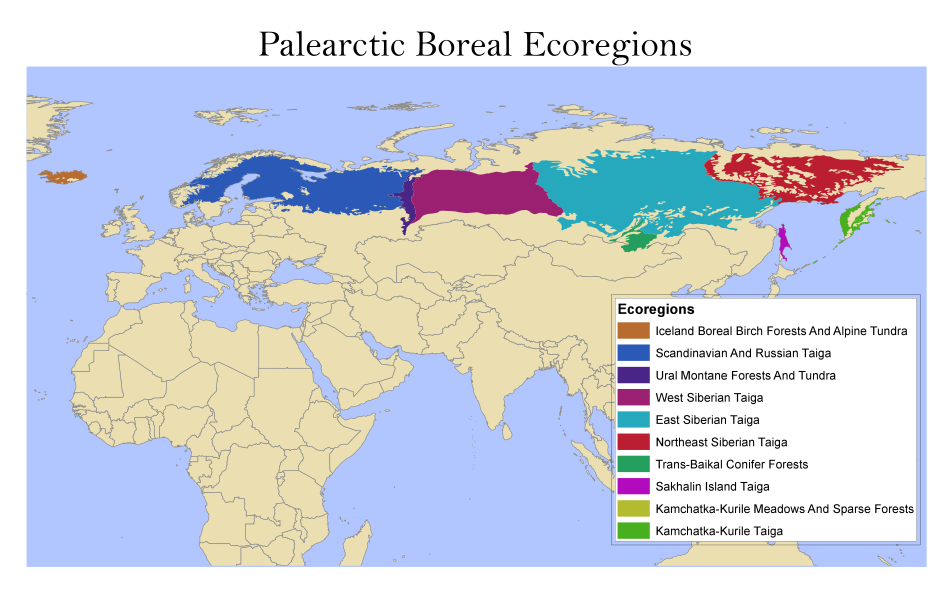 The country of Iceland has its own distinct boreal ecoregion, the Iceland Boreal Birch Forests and Alpine Tundra, which is only partially covered with vegetation, the rest being rock, snow and ice. This ecoregion is particularly important for a number of bird species that rely on the area’s rocky cliffs and wetlands.

The Scandinavian and Russian Taiga make up the boreal ecoregion occupying Finland, Norway, Sweden, and some of Western Russia. This ecoregion consists mainly of coniferous forest, dominated by Scots pine (Pinus sylvestris), with a mixture of understory juniper, spruces, and birches. This region is bordered by coastal conifer forests on the west, mixed forest, grassland and tundra to the north, temperate mixed forest to the south and other boreal forest ecoregions to the east.

The Ural Montane Forest and Tundra ecoregion makes up the transition zone between Europe and Asia, as well as boreal forest and tundra vegetation zones. As a result, this ecoregion contains a diversity of mountain-adapted plant and animal species. Further west from this transition zone lie the West Siberian Taiga 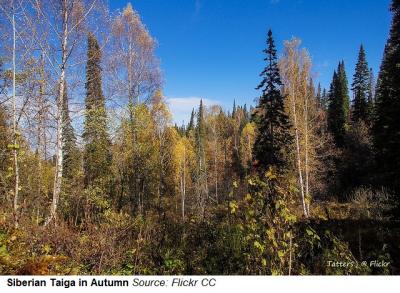 and East Siberian Taiga, respectively. Both of these regions are vast areas of relatively intact forest, but in terms of diversity and species composition they are distinctly different. The Western Siberian Taiga is mainly coniferous forest, marked by an abundance of wetlands. The Eastern Siberian Taiga, is geographically wide-spanning and diverse, and while dominated mainly by larch (Larix) forests that can withstand the climatic extremes of the region, it contains rich flora and fauna, particularly in comparison to the Western Siberian Taiga. The Northeast Siberian Taiga ecoregion, situated in the Sakha Republic (a subject of Russia) in Northeastern Siberia, is one of the largest areas of intact boreal forest in the world. The vast expanse of forest has remained relatively intact due to low human population and limited access for resource extraction, and has potential as a significant carbon sink under threats of climate change. The ecoregion contains both interior continental forest and maritime boreal forest, and stands of larch (Larix cajanderi) mixed with silver birch (Betula pendula) are found throughout. The Northeast Siberian Taiga is home to 680 vascular plant species and a number of animal species, including elk (Alces alces), arctic hare (Lepus timidus), lynx (Felis lynx), wolverines (Gulo gulo), weasels (Mustela sp.), brown bears (Ursus arctos), and a number of bird species (owls, woodpeckers, waterfowl, among others). 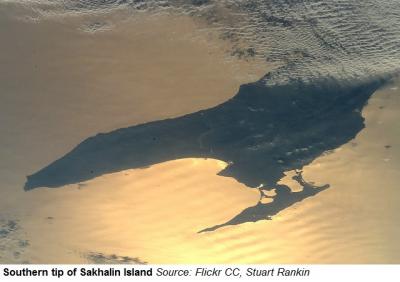 Russia’s largest island, off the Pacific coast, makes up another ecoregion, the Sakhalin Island Taiga. This zone experiences a more moderated climate compared to interior continental areas of the same latitude. The vegetation of the ecoregion includes mixed conifer and broadleaf forest, coastal meadows, larch forest interspersed with birch, and gives way to shrublands going up in elevation. The southwest part of the island yields the most unique area of the ecoregion, where boreal and more southern adapted species (such as Phellodendron sachalinense, Quercus crispula, Kalopanax septemlobus) grow interspersed with typical boreal species, such as pines and firs.