The Nearctic boreal spans Canada and Alaska, covering nearly 460 million hectares of land, and making up 13 percent of the world’s forested land cover.

A large portion of Alaska is covered by the Interior Alaska-Yukon lowland taiga, an ecoregion that stretches across the border of Alaska and Canada. While this ecoregion has a variety of ecological conditions due to differences in topography and microclimate, it is considered one single ecoregion because of the dominance of spruces throughout the landscape, as well as the lack of a Pleistocene glaciation. White spruce (Picea glauca) tends to occupy the warmer and drier sites within the region, while Black spruce (Picea mariana) is more capable of occupying wetter sites that are poorly drained. Also located in Alaska is the Alaska peninsula montane taiga, which spans the southern side of the Alaska peninsula. The climate is moderated by maritime influences (see more on maritime and interior boreal), and species of willow (Salix), poplar (Populus), and alder (Alnus) can be found; many parts of this ecoregion are dominated by scrub communities.

The majority of Nearctic boreal forests are found within Canada. The Northwest Territories taiga is located in the areas surrounding the Mackenzie River valle 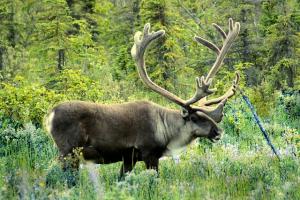 y in northwest Canada. Due to the high occurrence of wetlands, stunted stands of black spruce (Picea mariana) characterize the forests, as well as dwarf  birch (Betula sp.). Much of the forest in this ecoregion remains intact, but mining and development of oil and gas could pose a serious threat as highways throughout the region are expanded leading to increased fragmentation. Near the Mackenzie River valley are the Muskwa-Slave Lake forests, which feature mixtures of quaking aspen (Populus tremuloides), white spruce (Picea glauca), and balsam fir (Abies balsamea) as well as some stands of balsam poplar (Populus balsamifera) and black spruce (Picea mariana). It is estimated that 75% of the region remains intact, with most of the fragmentation pressures due to logging and the creation of pipeline corridors. Despite logging pressures, this region is still home to one of the most diverse areas of large mammals in the North American continent, including woodland caribou (Rangifer tarandus ssp. caribou), lynx (Lynx canadensis), grizzly bear (Ursus arctos), black bear (U. americanus), snowshoe hare (Lepus americanus), grouse (Dendragapus spp.), and elk (Cervus elaphus).

Located in a cold and semiarid region of the Yukon, the Yukon Interior dry forests are estimated to be 75% intact, with fragmentation pressure due mainly to mining, forestry activities, and expansion of the human population. The plant communities feature a unique patchwork of grassland and boreal species, with black spruce (Picea mariana) and white spruce (P. glauca) dominating the forests. In addition to supporting unique assemblages of plant communities, the forests are home to caribou (Rangifer tarandus), moose (Alces alces), grizzly and black bears (Ursus arctos and U. americanus), wolves (Canis lupus), and golden eagles (Aquila chrysaetos). 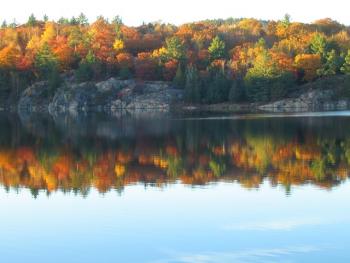 The Northern Canadian Shield taiga is part of a boreal and tundra transition zone, and therefore features very open and stunted forests of black spruce (Picea mariana) and larch (Larix laricina). Even with 90 to 95% of the region intact, pressures from mining and mineral exploration are threatening to increase levels of forest and habitat fragmentation. Vegetation assemblages in the Northern Cordillera forests follow an elevation gradient, with shrubs occupying the alpine elevations, alpine fir (Abies lasiocarpa), black spruce (Picea mariana), and white spruce (P. glauca) occupying the subalpine elevations, and black spruce, lodgepole pine (Pinus contorta), paper birch (Betula papyrifera) and aspen (Populus tremuloides) occupying lower elevation closed forests. Fire is a common natural disturbance in this ecoregion, and species such as lodgepole pine and aspen rely on fires as a natural regeneration mechanism.

The Mid-Continental Canadian forests form a continuous stretch of interior mixed coniferous and deciduous forests, including species of quaking aspen (Populus tremuloides), balsam poplar (Populus balsamifera), white and black spruce (Picea glauca and P. mariana), and balsam fir (Abies balsamea). Species assemblages are mostly determined by the presence of fire regimes, conditions of drainage, and patterns of topography. Only 50% of the ecoregion is classified as intact due to large scale forestry operations, oil and gas development, and mining operations.

Covering much of Northern Saskatchewan and portions of Manitoba and Ontario, the Midwestern Canadian Shield forests are thought to remain 80% intact, with habitat loss and fragmentation mostly due to logging, mining, and hydroelectric operations. Black spruce (Picea mariana) and jack pine (Pinus banksiana) are the two dominant tree species in the area, which sometimes coexist with shrubs from the Ericaceae family. Bordering the Midwestern Canadian Shield forests lies the Central Canadian Shield forests, mainly in the provinces of Ontario and Manitoba. The coniferous species that dominate the forests are black spruce (Picea mariana) and jack pine (Pinus banksiana), and fire occurs as a frequent but natural disturbance. However, there is a high degree of habitat loss, as 40% of the forest remains intact; much of this is due to large logging operations, with 50% of the region having been logged. 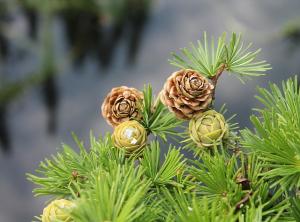 The Southern Hudson Bay taiga lies mostly within Ontario, just south of the Hudson Bay, as the name suggests. These forests are interspersed with wetland ecosystems, which cover about 50-75% of the ecoregion and are some of the most extensive in the entire North American boreal. Forests are mostly stunted in terms of their height growth, with black spruce (Picea mariana) and larch (Larix sp.) as the dominant species. About 99% of the ecoregion remains intact and unfragmented, due to very minuscule rates of anthropogenic activity. In addition to providing habitat for caribou (Rangifer tarandus), snowshoe hare (Lepus americanus) arctic fox (Alopex lagopus), and a variety of waterfowl, this ecoregion is home to the southernmost population of the Polar bear (Ursus maritimus).

Spanning most of Labrador and a large portion of Quebec, the Eastern Canadian Shield taiga is home to stunted stands of black spruce (Picea mariana) and larch (Larix sp.), with more minor distributions of white spruce (P. glauca), dwarf birch (Betula spp.), and willow (Salix spp.). With 95% of the ecoregion intact and no major fragmentation, the Eastern Canadian Shield taiga is home to the largest migrating herd of caribou (Rangifer tarandus ssp. arcticus). Also located in the east are the Eastern Canadian forests, which are distinguished from the neighboring ecoregions by a more maritime influence that allows populations of balsam fir (Abies balsamea) to become to climax and dominating species. The areas surrounding the Gulf of St. Lawrence feature a high level of plant endemism, with an estimated total of between 100 and 150 endemic plant species. However, this region has a long history of human settlement, and therefore only 40% of the land is still intact habitat. The Newfoundland Highland forests are entirely surrounded by the Eastern Canadian forests within the island of Newfoundland, and are considered a separate ecoregion due to the high elevation. It is the northernmost part of the Appalachian Mountains. Given the small area that is within the ecoregion, habitat fragmentation is very minor, as 80-90% of the region remains intact. The dominant tree species are dwarf black spruce (Picea mariana) and balsam fir (Abies balsamea).

The smallest Nearctic boreal ecoregion is the South Avalon-Burin oceanic barrens, covering only 800 square miles. It is made up of the outer headlands of the peninsulas of Newfoundland, which are naturally fragmented from each other geographically. Only dwarf populations of balsam fir (Abies balsamea) are found in some portions, due to the harsh conditions of high wind and salt spray that are prevalent year round