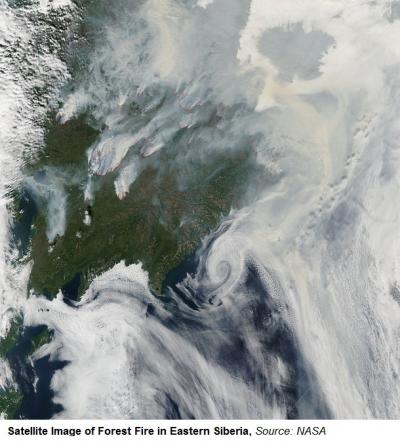 Fire is an important part of boreal forest ecosystems, occurring naturally on stand-level to landscape scales, driving physical and ecological dynamics of forest composition, structure, productivity, as well as carbon cycling and storage. Fires occur on 20 to 500 year intervals, ranging from ground-story burns to stand-replacing disturbances, and are driven by both human and natural causes. Between 5 to 20 million hectares of boreal forest burn annually, emitting an estimated 182 Tg of carbon (about 9.1% of global emissions from fires). Fire processes in the boreal are also important for carbon storage, and one study by Santin & Doeer (2015) estimated that at least half the amount of carbon released into the atmosphere from burns is sequestered into the long-term soil carbon pool in the form of charcoal. This charcoal makes up an estimated 1% of carbon storage in boreal forests. It is thought that this process is a carbon sink that has previously been unaccounted for in models of the global carbon cycle, and there is need for additional research to better understand the process in different forest ecosystems.

Fires are thought to be important for forest productivity in the boreal, as burning the organic leaf litter layer releases nutrients, which then become more and more limited due to low decomposition rates as the litter layer builds up again over the following years. A study by Ward et al. (2014) looked at the effect of litter layer build-up, post-fire in relation to stand productivity in the Canadian boreal, finding that productivity gradually declined for 80 years post-disturbance. The results of this study differed slightly from previous ones, suggesting that the rates of litter build-up and declining productivity could also be a factor of latitude and drainage patterns. This relationship between fire and nutrient levels has potential management implications, as harvest or clearcuts without burns may result in lower productivity levels. 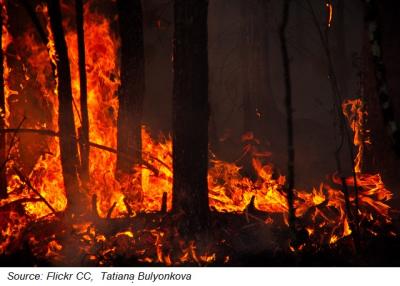 There are also interactions between species composition of boreal forests and the types of fires that occur in them. Fire regimes in the North American boreal and Eurasian boreal are known to be different, as are the species compositions of those forests. Forests in the North American boreal are more dominant in “fire embracing” species that are both spread and killed by fires. Spruces (Picea), which have flammable needles, and low-level branches that facilitate fire movement from ground level into high-intensity canopy fires, are one such species. Eurasian boreal forests have greater numbers of fire resistant species, such as those with thick bark, larch (Larix), which has higher moisture content in its needles, and Pines (Pinus), which self-prune, eliminating the fuel ladder of low branches that turns ground-story burns into canopy fires. As a result, fires in the Eurasian boreal are predominantly surface fires, occurring with greater frequency, over smaller areas and burning dry and dead material on the forest floor. This is in contrast to intense crown fires, characteristic of the North American boreal which occur every 180 years, on average (according to a study by de Groot et al.), and burn over large areas. For instance, de Groot et al.’s looking at fire data 2001 and 2007 found the average fire size to be 5930 ha in Canada compared to 1312 ha in Russia. The lifespan of tree species found in these two regions are also reflective of their respective fire regimes and life history strategies. Eurasian boreal species have longer lifespans, approximately 400-600 years, whereas North American boreal trees live only 150-200 years.

The different species dynamics and fire patterns in North American and Eurasian boreal forests in turn result in different climate feedback patterns. When high-intensity blazes in the North American boreal reveal underlying snow, more sunlight is reflected, generating more cooling during spring months, compared to the effect on intact forests in Eurasia, which are more likely to absorb radiation from the sun. However, taking into account the full impact of fires in the boreal involves looking at carbon dioxide and other gasses released from burned biomass, soot deposition on snow (which would decrease the albedo of snowy areas), and the impact of aerosol particles that are released into the air. Determining the precise impact of boreal fires on climate change is a complex process, and many factors act differently over different timescales following a burn. Due to the lack of historical fire data in some regions, such as Russia, it is impossible to know if current events are representative of long-term trends. While there is high uncertainty in climate feedback models, the overall effect of fires in the boreal on climate is thought to be neutral or warming. Read more about boreal forests & climate change here.