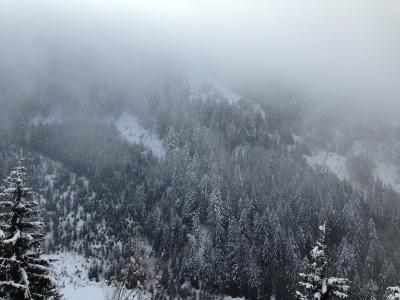 Six genera of trees are found as canopy dominants across the entire extent of boreal forest: pine (Pinus), fir (Abies), larch (Larix), spruce (Picea), birch (Betula), and aspen (Populus). Forest structure within the boreal tends to be simple, with a few dominating canopy species and a low diversity of understory species. Boreal regions can also be classified based on their location within the continent. The interior boreal is characterized by extreme cold and dry conditions, and tends to have a disturbance regime of catastrophic fires. Spruce, larch, and pine are the dominant species assemblages in interior boreal forests. The maritime boreal is so named for the maritime influence of the Pacific and Atlantic oceans that provide a more moderate climate.  The maritime boreal is generally more moist and productive than the interior boreal, with firs as a dominant canopy component.

Conifers evolved prior to angiosperms under inhospitable climate conditions. These circumstances are reflected in their wood anatomy and water transport system, which is well suited to withstand cold and dry conditions. In fact, angiosperms, such as broadleaf species (i.e. oaks, maples) tend to outcompete conifers on more favorable sites, thus relegating conifers to the more inhospitable sites. Boreal conifers perform maximum efficiency photosynthesis at lower temperatures than plants of more southern or temperate regions. Most conifers are evergreen (with the exception of larch, which sheds its needles annually), allowing these trees to begin photosynthesizing early in the spring when temperatures are favorable, rather than wasting valuable time to grow new leaves.

These needled coniferous species also display more leaves per unit area than deciduous broadleaved species do. The needles tend to be angled to the sun, allowing them to use light for photosynthesis more efficiently, which is beneficial where cold temperatures already constrain photosynthesis. Furthermore, the narrowness of the needles reduces the surface area of water loss, which is important where cold and dry conditions prevent trees from replenishing their water from the ground. Needles also have a thick waxy coating called a cuticle that helps prevent water loss and protects inner leaf architecture from desiccation and abrasive winds.

Most conifers are cone-shaped, featuring a taper from wide at the bottom to narrow at the top. The advantage of the conical shape of many coniferous boreal trees is threefold: the shape prevents snow from piling on branches, it helps to keep these shallow-rooted trees sturdy in windy conditions, and it allows branches and needles to receive more direct sunlight without shading other branches. Having a conical shape is especially useful for receiving sunlight that comes from a steep angle at these high boreal latitudes.

Coniferous species rely on wind for pollination and seed dispersal. While this strategy is advantageous in open and early successional habitats, it is also common in boreal forests, where conifers reach the canopy and are exposed to the windy conditions necessary for pollen dispersal. Wind pollination relies on a strategy whereby large quantities of pollen are produced, and a relatively small proportion successfully pollinates. While this is a risky strategy, plants have evolved adaptations to increase the chances of pollination. Studies have shown that pollen is aerodynamic and released when wind conditions are active so as to effectively disperse over larger distances.

Soil types vary across the large circumpolar extent of the boreal. Heavily leached and nutrient poor podzols are the most common. Podzols form when the acidic needle layer leaches clays and minerals into lower soil horizon layers, leaving a sandy texture in the upper layers. Organic histosols characterized by a developed peat layer are common in the bogs of the boreal, and gelisols are common in areas with permafrost. Some areas are even characterized by alfisols, which are of higher fertility. In general, soils of the boreal are very acidic, due to the build up of lignin-rich needles. Furthermore, decomposition of acidic needles is slow because of low temperatures and limited microbial activity.

For a more in-depth look at boreal forest ecoregions, check out the Nearctic and Palearctic sections below.