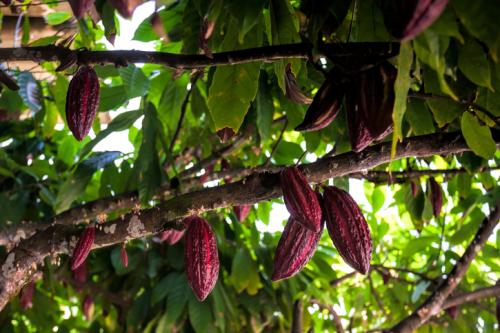 High quality Arabica coffee is normally cultivated in the foothills of the Andes, Central America, and southern Brazil, while lower quality Robusta coffee is cultivated in lowlands of Brazil, as well as Vietnam and Indonesia. Brazil is the largest producer in the world, but most cultivation is restricted to the hills of southern Brazil in Minas Gerais, Sao Paolo, and Paraná. Modern coffee cultivation is practiced in full sun, where yields can be higher and damage from the coffee rust fungus (Hemileia vastatrix) may be less. However, full sun coffee may be more susceptible to wind and frost damage, often requires expensive agrochemical inputs, and can lead to soil erosion. Shade coffee, on the other hand, provides biodiversity benefits and may be more sustainable in the long term (see a review of shade coffee in BioScience)[i] Certification programs such as Rainforest Alliance, Bird Friendly, Fair Trade, and Organic seek to recognize the added value of shade coffee production and provide economic and social benefits for coffee producers.

Chocolate is produced from the cocoa plant (Theobroma cacao), native to the Amazon basin, and chocolate drinks were consumed by the Aztecs when Europeans arrived in the New World. Today, most cocoa is cultivated in West Africa in full sun plantations, and commercial chocolate is processed with high quantities of sugar. In the Amazon basin, high quality chocolate varieties are still cultivated in the shade of the rainforest. While coffee is often grown in highlands, cocoa is usually grown in lowlands below 1,000 meters elevation. Similar to coffee, full sun plantations (Forastero variety) can achieve higher yields, but shade cocoa (Criollo variety) develops greater flavor quality and offers biodiversity and pest control benefits[ii].  Also, forest habitats have been found to improve the pollination success of coffee and cocoa plants[iii] (article in NWF). See a review of shade cocoa at World Agroforestry Center and in Ambio.