Sugar cane, Palm oil, and Biofuels in the Amazon

Numerous crops are grown in the Amazon region for biofuels. Although biofuels offer climate benefits because they are cleaner burning than fossil fuels, their land use impact can be massive, replacing food crops and resulting in an overall larger carbon footprint. Sugar cane covers the greatest total crop area, while palm oil, jatropha, and other oil seeds are increasing. Soybean is also used for biofuel, although its primary destination is for animal feed. 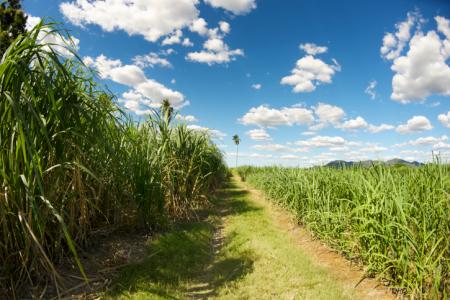 In Brazil, sugar cane is primarily grown in the Cerrado savannah region of the southeast, where only 40% of the native ecosystem remains. Brazil has 8-9 million hectares of planted sugarcane, about half of which is used for ethanol fuel. As an ethanol fuel, sugar cane is several times more efficient than corn ethanol. Production for ethanol fuel was largely driven by the OPEC energy crises of the 1970’s; programs mandated blending of ethanol with gasoline. Today, vehicles in Brazil run on 18-25% ethanol blends, and most major cars in the country run on flex fuel engines. Ethanol fuel use has actually declined recently in Brazil but is increasing as an export to countries trying to use greener fuels and reduce oil imports. Today, Brazil is the world’s largest producer. Productivity of sugar cane can reach approximately 7,000 liters / hectare; scientists look for ways to increase yields by harvesting the lignin components of the plant as well. Brazil has announced plans to expand sugar cane cultivation, but confined to without clearing natural ecosystems. However, while sugar cane is mostly grown outside of the Amazon, some groups allege that this cultivation displaces cattle ranching, encouraging deforestation in the Amazon.

Most biodiesel production in Brazil comes from soybean plantations, but only a small portion of total soy production in Brazil is used for biodiesel. Like with ethanol, biodiesel has had an important growth in Brazil with the purpose of supplying local demand for fuel. By 2008, over 50 biodiesel processing plants had been established in the country with a production capacity of nearly 3 billion liters, dominated by the state company Petrobras. In Brazil, government programs such as the National Biodiesel Production Program (PNPB), promote biodiesel cultivation with tax exemptions and loans. Although more deforestation is driven by cattle ranching than by expansion of crops such as soy, indirect effects where soy replaces cattle pasture but cattle pasture clears new forest, are possible.

Palm oil, while at present not extensive in the Brazilian Amazon (approximately 100,000 hectares), has the potential to grow into a major land use in the Amazon basin. Palm oil requires tropical climates and has already displaced massive areas of tropical rainforest in Indonesia and Malaysia. Palm oil yields are the highest per hectare for any biofuel, and Brazil has policies that encourage biofuels, perhaps even permitting palm oil plantations to count towards the 80% forest area required under the forest code. Palm oil cultivation already reaches one million hectares in Colombia and Ecuador, and is growing in Peru. Many argue that if confined to existing agricultural land, palm oil can prove to be a sustainable land use activity by concentrating agricultural activity. Moreover, palm oil plantations employ much more people than soy or cattle, creating jobs and income to discourage smallholders from clearing new cattle pasture. Read about a palm oil agroforestry system at the World Agroforestry Center. However, strong governance is essential; evidence from Peru shows that high yield palm oil cultivation encourages further forest clearing.

In drier regions of Brazil, jatropha is a popular crop for biofuel such as aviation fuel, often interplanted in pasture. Yale F&ES researcher Rob Bailis studies energy and climate change; see his research about jatropha in Brazil (Environmental Science and Technology) as well as an analysis of biofuel policy (Annals of the Association of American Geographers)

Forero, J. (2014). Brazil’s ethanol sector, once thriving, is being buffeted by forces both man-made, natural. Washington Post. Retrieved from https://www.washingtonpost.com/world/brazils-ethanol-sector-once-thriving-is-being-buffeted-by-forces-both-man-made-natural/2014/01/01/9587b416-56d7-11e3-bdbf-097ab2a3dc2b_story.html

Friends of the Earth Europe. (2010). Three Briefings on Indirect Land Use Change (ILUC) and Emissions from Biofuel Crops. Retrieved from http://www.foeeurope.org/agrofuels/resources/biofuels_briefing_sugar_cane.pdf

Palm Oil in the Amazon

Palm oil, a biofuel crop that has destroyed massive areas of tropical rainforest in Indonesia and Malaysia, is posied to expand in the Amazon, which has vast extension of land suitable for palm oil cultivation. Despite the great risk to Amazon forests, some argue that well planned palm oil can use replace pasture land and actually reduce the global threat to tropical forests . Nevertheless, many governments in the Amazon basin are encouraging oil palm expansion; a recent report from Peru discovered large illegal oil palm development in the Loreto - Amazon rainforest.