Home » Tropical Zone » The Amazon Forest » Land Use and Agriculture

Land Use and Agriculture in the Amazon 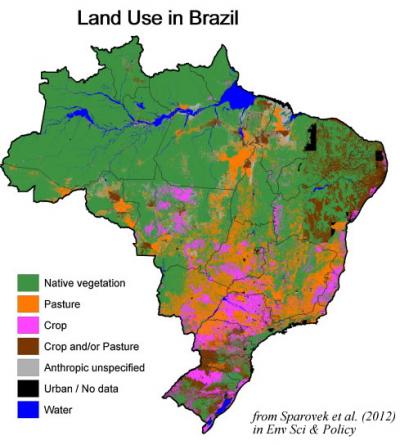 Governments and international actors are increasingly understanding the connection of forests and land use. In some areas of the Amazon basin, countries are in the process of a forest transition, where economic growth leads to urbanization, forest recovery, and less pressure on existing forests. Most forest clearing in the Amazon occurs around the “arc of deforestation” from Para in the north to Mato Grosso in the south and the Brazil-Peru-Bolivia area in the southwest, but the vast interior of Amazonas state is still forest. Approximately 20 million people live in the Amazon basin, most of them in major cities such as Manaus and Iquitos. Almost half a million indigenous peoples from hundreds of tribes live in Amazon forests; many live traditional lives in designated indigenous reserves.

Large scale forest conversion in the Amazon has only occurred since the 1970’s and 1980’s, together with the growth of Brazil’s economy. Before the arrival of Europeans, indigenous peoples occupied the Amazon basin for thousands of years practicing small sale shifting cultivation, likely in populations much larger than today. Traditional indigenous peoples cultivated manioc, tubers, fruit, and palm trees in rotating plots, supplementing their farm plots with forest resources of rubber, nuts, fruits, fibers, and medicines (see Indigenous land use page). In the 18th and 17th centuries, timber harvest and rubber extraction cut deep into Amazon forests, but many settlements were temporary. In the second half of the 20th century, Brazil and other countries of the Amazon basin initiated land reform and colonization programs to finally encourage permanent settlement.  Migrant farmers to the Amazon basin soon discovered however that rainforest soil was unsuitable for many forms of permanent cultivation. Amazon soil is old and intensely weathered, generally acidic, infertile, and subject to compaction from intense solar radiation. Most nutrients are stored in aboveground vegetation; cutting and burning enriches soil but nutrients are leached or unavailable to crops after just a few growing seasons. Cutover lands turned over to cattle pasture, but in many cases returned to secondary forest.

International Institute for Environment and Development,. (2015). The interface between forests, agriculture and climate change: understanding the implications for REDD. Retrieved 25 September 2015, from http://www.iied.org/interface-between-forests-agriculture-climate-change-understanding-implications-for-redd

The Forests Dialogue, based at Yale F&ES, organizes stakeholder dialogues on issues facing tropical forests. See a report from a recent dialogue in Brazil on the 4 F’s- food, fuels, fiber, and forests. 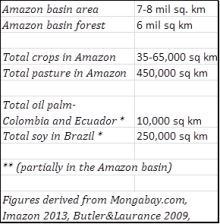 Southern Brazil is currently experiencing an unprecedented drought, which has been found to be linked to deforestation. It is known that forests drive localized rainfall patterns, and deforestation has the capability to alter this precipitation and contribute to drought. Read more about these drought conditions from CIFOR.