Forests of the Amazon Basin provide much more than just wood. Fruits, nuts, fibers, and medicines are all found in the rainforest, not to mention one the most important of all economic products derived from the Amazon- rubber. Worldwide, millions of forest inhabitants and forest dependent peoples derive a substantial portion of their income from the harvest of these products. Moreover, sustainable management of these products can create an incentive for continued conservation of their forests. 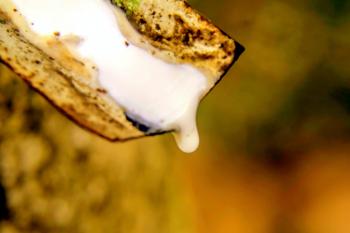 Rubber (Hevea brasiliensis) is native to the Amazon basin and grows in the mid-story of lowland rainforest. Rubber exploitation in the 1800s transformed the Amazon rainforest (see history of settlement); although most international production today has shifted to Asia, harvest remains an important economic activity in the region. In the 1980s and 90s, the extractive reserve movement in the Amazon basin, based largely on the work of Chico Mendes, promoted the use of community managed reserves based on rubber tapping, Brazil nut harvest, and other non-destructive uses of the rainforest, in contrast to soy and cattle development. While some argue that extractive reserves are economically unsustainable and do not provide the ecological value of pristine reserves, others contend that extractive reserves build valuable local support for conservation and prevent large scale forest conversion. See more about extractive reserves at CIFOR and examples in Brazil- Alto Jurua, Rhondonia, Acre. 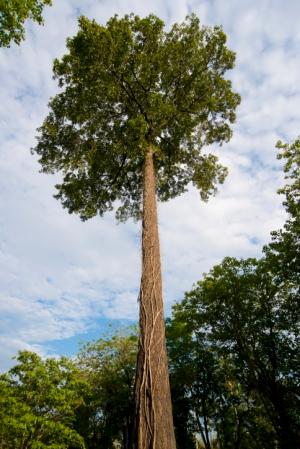 One of the most commercialized trees from the Amazon rainforest is the Brazil nut (Bertholletia excels). The Brazil nut is a large canopy tree, and seeds are distributed by large rodents (primarily agoutis). While harvest of these nuts is a significant economic activity in many areas of the Amazon, studies have found that many areas might be overharvested, resulting in insufficient natural regeneration, and a shift of cultivation to the more remote western areas of the Amazon in Madre de Dios, Peru, and lowland Bolivia. Trees are long lived, mature trees can reproduce for more than 150 years, and Brazil nuts have likely been planted and specially managed by indigenous peoples in the Amazon for millennia. However, the lucrative nature of Brazil nut harvest can lead to monopoly and theft, as seen in high production areas of Pando, Bolivia. See more about Brazil nut conservation in the Peruvian Amazon from the Amazon Conservation Association. Other valuable plants in the Amazon basin include palms -  palm heart (Euterpe precatoria, Bactris guisapeas, and others), and palm fruits from peach palm (Bactris guisapeas), acai (Euterpe oleracea), moriche (Mauritia flexuosa), and ungurahua (Oenocarpus bataua), to name just a few.

Sustainable harvest of these non – timber forest products can sometimes provide significantly higher revenue than timber value (also research by Yale F&ES researchers Robert Mendelsohn and Charles Peters). Non timber forest products are important for rural people because they can provide an insurance in times of low income or crop failure. Moreover, forest products have non-monetary use value for rural people: even if the fruit or medicine is not sold, it is still consumed, thus saving money that would otherwise be spent on food, medicine, building materials, etc.

The Amazon forest also provides a wealth of natural medicines. In the dense vegetation of the rainforest, plants often use chemical defenses of alkaloids and secondary compounds to prevent herbivorous insect attack. Used properly, these chemical compounds can have potent and valuable medicinal properties. Anesthesia was originally derived from various local plants primarily used as neurotoxins for hunting. Quinine, the medicine to fight malaria, is derived from the bark of the Cinchona tree. Tobacco, native to the Americas, is used for medicinal purposes such as sinus infections. Species of Lonchocarpus contain rotenone and are used as a toxin to assist fishing. Other plants with hallucinogenic properties such as yage / ayahuasca (Banisteriopsis caapi) are used for medicine and ritualistic purposes. Unfortunately, many important medicinal plants are also harvested for their timber, and are in decline in various parts of the Amazon basin. Many of these medicines are used by urban populations in addition to rural ones. One example is Dipteryx odorata, locally known as cumuru or tonka bean, a long lived pioneer tree with masting fruits that produces seed oil used for perfume and medicine. NGOs such as the Amazon Conservation Team, led by Yale F&ES alum Mark Plotkin (MFS ‘81), work with indigenous peoples to preserve traditional knowledge with programs like “shamans and apprentices”.

Many valuable non-timber forest products are produced and collected by forest dependent people with poor access to markets. Canopy Bridge is a new platform from the forest conservation community that aims to connect these sustainable producers with local and international buyers.