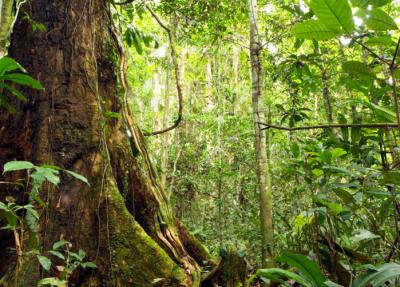 Peru is the fourth largest rainforest country in the world, and its Amazon forests are one of the most biodiverse areas of the world. Half of Peru’s land base is classified as forest, the vast majority of which is in the Amazon basin. Deforestation in Peru has traditionally been very low, 0.2-0.4 % annually, largely due to difficulty of access. Traditionally, most forest activity has been selective logging, which normally does not get recorded as deforestation. Logging is concentrated in the Ucayali region, near the river port of Pucallpa, and increasingly along the newly completed inter-oceanic highway linking Brazil with southern Peru in the state of Madre de Dios.

Most forestland in the Peruvian Amazon is held by the state or occupied by indigenous peoples. Peru reformed its forest governance in 2000-2001 with changes in regulation and the introduction of long term logging concessions in an attempt to promote sustainable forest management. Although delayed considerably, this concession system has eventually granted large areas, approximately 7 million hectares by 2011. While concession law favors local landholders, many argue that the system is corrupt and dominated by large timber companies who simply “enable” locals through a patronage system. Peruvian forest policy was further reformed in 2008-2010 following the introduction of a free trade treaty with the United States, where the US specifically required improvements for assurance of legal forest trade. However, in adapting Peruvian law to the free trade treaty, several executive decrees created loopholes to convert forest land into agricultural land via reclassification of land use. This action was widely opposed by national indigenous groups, resulting in protests, roadblocks, and a violent standoff in the region of Bagua, Amazonas in 2009. Following this, controversial sections of the forest regulations were suspended and a multi stakeholder dialogue was initiated, including indigenous groups and NGOs. The dialogue closed in 2011, but lack of legal clarity and poor enforcement make the implications of new regulations on illegal logging unclear. Peru is still often the subject of reports of massive illegal logging and corruption. In 2012, the Environmental Intelligence Agency, a non-profit reporting agency, completed an investigative report of illegal logging activity in the Peruvian Amazon. These reports claim widespread illegal timber trade and corruption in forest logging concessions; as much of 80% of the timber trade leaving the country is estimated to be illegal. 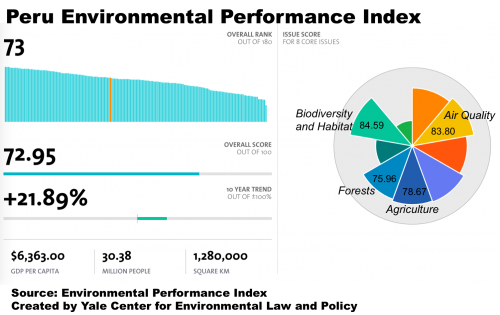 In recent years, as Brazilian deforestation has decreased, deforestation has risen in Peru. This rise has likely resulted partially from leakage from neighboring Brazil, as forest enforcement and monitoring in that country has strengthened, in addition to economic development and recently developed infrastructure access in Peru. These factors, combined with high prices for palm oil and weak government enforcement, will continue to encourage forest conversion in the Peruvian Amazon. Palm oil conversion is underway in Madre de Dios as well as remote areas of the northern Peruvian Amazon. Forests in southern Peru have been greatly affected by the recently completed Inter-oceanic highway, connecting Acre, Brazil with Madre de Dios, Peru, and further on to ports on the Pacific (see highways page). Peru’s forests are also threatened by gold mining. Mining in the Amazon region is often practiced informally along rivers at the artisanal level. In this process, miners often dredge river sediment and filter it with mercury, a harmful contaminant. A recent study in Plos One examines impacts of gold mining in the Peruvian Amazon. Road access to mining settlements is also a significant cause of deforestation. At the larger level, oil concessions threaten Peru’s forests; a recent study found that almost half of the Peruvian Amazon is leased to active oil and gas concessions.

Despite promotion of oil, mining, and land use conversion in the Amazon, the Peruvian government has been actively involved in REDD+ negotiations, participates in UN-REDD and the World Bank FCPF, and has numerous projects around the country. Indigenous peoples have been vocal in the development of Peru’s REDD+ proposals, objecting to early drafts with unclear means for stakeholder consultation. Opposition to government proposals and attempted scamming from “carbon cowboys” in 2011 has led indigenous organizations to propose an alternative “indigenous REDD” proposal which rewards indigenous stewardship of Amazon forest with secure land tenure rights. The Forests Dialogue, based at Yale F&ES, holds stakeholder dialogues with forest communities, forest ministries, and other stakeholders in the Peruvian Amazon. Organizations such as CIFOR work in the Peruvian Amazon to support sustainable community forestry operations. 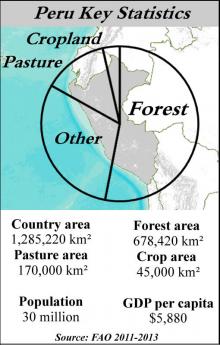