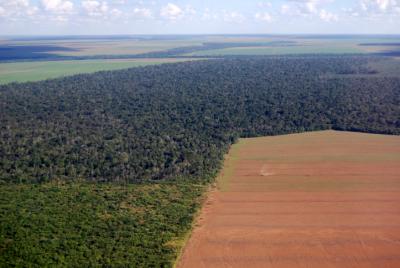 Brazil comprises 2/3 of the Amazon rainforest and is home to 1/3 of the remaining rainforest in the world. Brazil’s size makes it the most biodiverse country in the world in total numbers of species, with more than 55,000 species of vascular plants. The Amazon basin in Brazil contains not just rainforest but a mosaic of habitat types ranging from seasonal forest, flooded riparian forest, and savanna.

Due to its massive size, deforestation in Brazil beginning in the 1970s and 1980s led to international attention to protect rainforest habitat. Deforestation in Brazil is largely driven by large scale forest conversion to cattle and later to soy cultivation. In the Brazilian Amazon, about 80% of the deforested areas are within 30 km of official road. Much of this forest loss is located along the Trans Amazonian highway running east-west from the dry northeast coast into Para in the central Amazon, and along the soy highway running south-north from Mato Grosso into the interior Para. State directed resettlement programs in the 1970s and 80s attempted to populate these remote regions of the country. These programs aimed to alleviate drought and overpopulation in urban regions of the south, but faced difficulty as farmers arrived in new regions without adequate farming skills and agricultural inputs. Many farms failed, and settlers suffered from malaria and overall poor sanitary conditions. Moreover, farmers were encouraged to clear land in order to claim title. Resettlement continues with support from the Institute for Rural Settlement and Agrarian Reform (INCRA). Land reform based on these models of re-settlement and squatters rights caused massive amounts of deforestation, as well as frequent violent conflict. Famous cases include Chico Mendes, who advocated for sustainable forest use by rubber tappers, and was killed in 1988, and the nun Sister Dorothy Stang, who was killed in 2005.

Deforestation in the Brazilian Amazon is conducted largely on private lands, where loggers pay landowners for the timber to extract. In the 1980s and 1990’s the vast majority of deforestation occurred on medium and large properties where landowners logged their forest in order to establish cattle pasture, partially as a means to assert land claim. Land tenure is an important component of forest governance in Brazil. About half of forestland in the Brazilian Amazon is managed as protected area, while the other half is private land or occupied public land. Land tenure in this occupied half, especially in the remote Amazon, is often complicated by overlapping claims, partially resulting from the re-settlement programs and squatter’s rights of the past. The Terra Legal program, established in 2009, attempts to remedy some of these challenges by granting title to smallholders occupying forest land. However, the program seeks to improve on past efforts by only permitting landowners that have peacefully occupied land since 2004, do not own other forest properties, and maintain compliance with the Forest Code, which requires 80% of the property to be in forest cover. Brazil’s forest code of 80% forest cover dates from the 1960s, but access to remote areas and corruption made this law rarely enforced. Today, under the Terra Legal program, if property owners do not conserve sufficient forest cover, they are required to submit environmental compliance plans. If landowners and municipalities fail to meet these criteria, they can risk denial of agricultural credit and product embargoes. The program has registered thousands of possessions, but has only issued title to a small number; in Para, most parcels are registered. Moreover, values of lots sold by government are below market values, likely encouraging land speculation and further forest conversion (Oecoamazonia; Imazon). 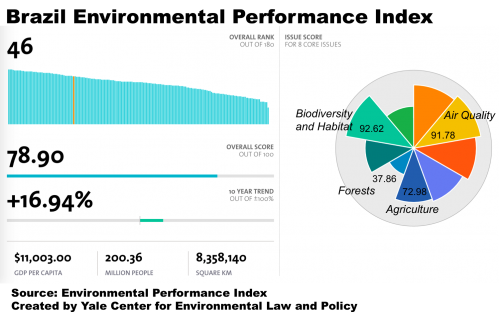 In the public lands, forest governance law was weak until 2006, when the Brazilian government passed the Public Forest Management Law. This law created a forest regime establishing concessions and regulation by the Ministry of Environment and the Institute of Natural Resources (IBAMA). Concessions are granted through a public bidding process, usually for 35 years, usually with a cut limit of 30 cubic meters / ha and 50 cm minimum diameter. However, researchers have argued that this system will be unable to allow for sufficient growth of commercial species; also that forest agencies lack the staff to teach low impact harvest techniques and enforce regulations. In 2010, Brazil had leased a very small amount of private concession forest, and instead announced plans to sell large forest areas.  Throughout the Amazon basin, mahogany is protected as a CITES II species; trade of mahogany was temporarily banned in Brazil in 2001 following allegations of illegal activity (see mahogany). Brazil has banned the harvest of Brazil nut and Brazilian rosewood, and also forbids most export of unprocessed logs. Since the last few years, Brazil’s forest sector must comply with forest regulations in order to export to the US under the Lacey Act and the EU under the FLEGT.

Outside of areas designated for timber harvest, protected areas are managed by the Chico Mendes Institute of Biodiversity Conservation. Other organizations include CONAFLOR, a government and civil society advisory board for forestry, IMAZON, an NGO that monitors deforestation, FUNBIO, an environmental fund that coordinates finance of protected areas and biodiversity conservation, INPE, the Brazilian space institute that monitors deforestation, and IPAM, a governmental research institution focusing on forests, climate, and natural resources.

In 2003, President Lula and Environmental Minister Marina Silva began to enforce the forest code with greater force. This enforcement was coupled with the soy moratorium, pushed in 2006 by Greenpeace to boycott soy derived from recently deforested land. These forces, combined with measures to restrict credit for landowners practicing illegal conversion, a large expansion in protected areas and designated indigenous lands, and greater capacity for forest monitoring and remote sensing, led to a significant reduction in deforestation in the Brazilian Amazon beginning in 2005. Brazil’s reduction in deforestation has been recognized internationally and generally attributed to a combination of improved governance, conservation measures, and supply chain management. However, recent reports have discovered a rise in deforestation rates. Recent reforms to the forest code have also incited controversy. In 2011 and 2012, the forest code was amended to require reforestation measures for lands deforested illegally, but exempts land owners less than 400 hectares. Studies also show that landowners do not comply with the forest code because of the immense economic benefits from soy and beef production. Some have argued that this loosening of the Forest Code has resulted in an increase in deforestation.

To maintain reductions in deforestation, Brazil has developed numerous conservation policies and payments for environmental service programs. Brazil has several individual REDD+ projects, such as the Juma project in Amazonas and the Surui project in Acre. Several groups are also involved in jurisdictional projects such as in the state of Acre. Brazil manages a national fund called the Amazon Fund, largely provided by the government of Norway, to implement payments for forest conservation activities. See Conservation Initiatives - REDD+ page.  Similarly, the Bolsa Floresta program in the state of Amazonas pays landowners and communities to help protect forest areas.

Tollefson, J. (2013). A Light in the Forest: Brazil’s Fight to Save the Amazon and Climate-Change Diplomacy. Foreign Affairs. Retrieved from: https://www.foreignaffairs.com/articles/brazil/2013-02-11/light-forest

WWF. (n.d.) Resettlement in the Amazon. Retrieved April 1, 2014 from: http://wwf.panda.org/what_we_do/where_we_work/amazon/problems/poorly_planned_infrastructure/resettlement_amazon/ 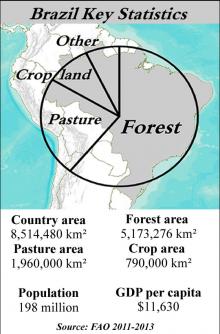