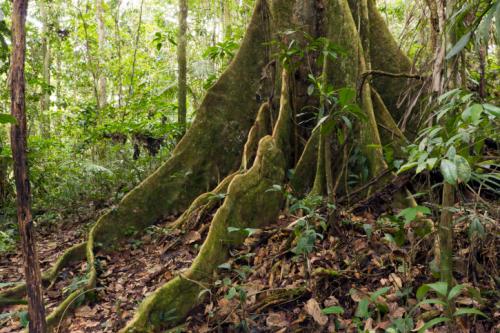 The most biodiverse place on earth, the Amazon rainforest teems with life. Thousands of tree species, 50,000 species of other plants, and hundreds of thousands of insects can be found throughout the forest habitats of the region. Although the magnitude and complexity of life in the Amazon makes a summary quite difficult, the following general characteristics can be usually be observed.

Moist forests of the Amazon basin are normally evergreen forests stratified with 3-4 layers of vegetation: under-story, sub-canopy, canopy, and occasionally the emergents layer. Emerging trees reach up to 50-60 meters high, above the canopy of the forest. The canopy layer averages 25-30 meters in height and forms a mass of continuous tree coverage. The sub-canopy is often dominated by palms, and contains trees that wait for light openings to reach into the canopy. The understory layer contains small trees and shrubs often with morpohological adaptations to survive in low light and chemical adaptations to protect against predators.

While tropical forests often seem quiet on the ground, the forest canopy buzzes with life. Amazon rainforest trees support hundreds of species of vines and epiphytes such as orchids, bromeliads, and mosses. More than plants, the canopy provides the structure for birds and arboreal animals such as sloths and monkeys. The most abundant life in the rainforest, however, are insects; studies find thousands of species in one hectare of tropical forest. One of the first estimates of the incredible diversity of the rainforest canopy was estimated in 1982 by Terry Erwin at the Smithsonian Institution research station in Panama.

Unlike temperate soils, most tropical soils are extremely old and weathered, providing little nutrient input. Moreover, nutrients in the leaf litter are rapidly broken down and are taken up by the shallow plant roots close to the soil surface, or they are rapidly leached or washed off from the frequent rains.

Dense vegetation also leads to soil acidity, and high amounts of aluminum and iron that can be toxic to many plants and reduce the amount of available phosphorus, an important plant nutrient. Because of the age and highly weathered nature of many tropical soils, phosphorus is limited, making rainforest soils often incompatible with permanent agriculture. To manage these challenges, native peoples practiced shifting cultivation where agricultural plots were rotated with forest, as well as polyculture, with perennial crops.

Rainforest trees are massive, not just in their canopy but also in their roots. Shallow and/or buttressed roots are common due to the fact that the majority of nutrients are found near the soil surface; buttresses also help with stability in wet soils. Many plants in tropical forests also have aerial roots, for example in strangler figs (Ficus spp.).  Bark on tropical trees is usually smooth and thin, instead of the thick textured bark of dry or temperate forests. Smooth bark prevents epiphytes and lianas from growing on the tree surface, as well as reducing the risk of fungal infection. Leaves are often waxy with drip tips to shed excess water and prevent nutrient loss.

Other important plant adaptations include the myriad defenses against predators- the millions of herbivores waiting to devour plant leaves. Many tropical plants develop chemical defenses such as alkaloids (caffeine, nicotine), tannins, saponins, and other active compounds that protect the plant against insects, pathogens, and other animals. Another defense is latex, famous in rubber trees (Hevea spp.) and many other plants of the Euphorbiaceae and other families. Many other Amazon plants have mutualistic relationships with insects and other organisms for self-defense, such as providing habitat or food for biting ants, which in turn protect the plant against attack from herbivorous insects.

Forests of the Amazon rainforest are also home to a remarkable array of pollination and seed dispersal mechanisms. In the interior of the forest, especially in the understory, little wind is available to pollinate flowers and disperse seeds, so many plants have developed elaborate relationships with insects and other animals. Various flower types exhibit colors, aromas, and nectar rewards to attract pollinators such as bees, butterflies, moths, and hummingbirds. Plants have also evolved to create edible fruits and seed covers to facilitate dispersal with rainforest animals such as ants, toucans, bats, and agoutis. Characteristics of rainforest plants and seed dispersal form the basis of the density dependence theory of ecology, where plants evolve traits to disperse their seed and ensure greater survival farther away from the mother plant. Interestingly, these characteristics, as well as the frequent mild disturbance of events such as treefalls are thought to be one of the major factors leading to the great biodiversity of tropical rainforests. A recent study by Yale researcher Simon Queenborough indicates the impact of micro level disturbances from palm fronds and peccaries on plant communities in the Ecuadorian Amazon.

Biodiversity can be measured in several ways, but most metrics agree that the Amazon basin has an outstandingly high diversity of plants, animals, and other living organisms. The most common is species richness, or the total number of species found in one area; using this method, researchers have estimated Ecuador’s Yasuni National Park and Peru’s Manu National Park, to be among the most biodiverse areas on the planet. 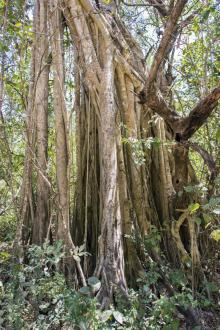