The Amazon basin is comprised of a mosaic of ecoregions types; while moist forest dominates most of the landscape, seasonal forest, flooded swamp, and savannah comprise significant parts of the basin.

Beginning in the north-central Amazon, the Japurá-Solimões-Negro moist forests and the Rio Negro campinarana are unique nutrient poor habitats scattered across the Rio Negro and Rio Branco region. The campinarana habitat is similar in climate to surrounding regions but is unique in its soil characteristics: leached, acidic, and swampy. Some of this region is forest, but much is shrubby and savannah. Because of the soil conditions, the region has high beta diversity and is home to many endemic plants. East of the Rio Negro region lies the Uatuma-Trombetas moist forests, a region of evergreen forest, varied topography, and blackwater nutrient poor rivers.

The eastern edge of the Amazon basin contains the Tocantins-Pindara, the Xingu-Tocantins-Araguaia and the Tapajós-Xingu moist forests, all evergreen forests that have been severely impacted from settlement and deforestation. Much of this forest lies along the trans-Amazonian highway around the state of Para. In the central basin, the large Madeira-Tapajós moist forest extends from the Amazon River south into Mato Grosso, Rondonia and northern Bolivia. These forests contain a mix of lowland evergreen forests and savannah transitional forest in the south. Much of this forest is threatened by soy expansion in the state of Mato Grosso.

Further into the Amazon basin in the state of Amazonas lie the Purus-Madeira moist forests, the Juruá-Purus moist forests, and in northern Peru the Solimões-Japurá moist forests. This region contains evergreen forest, high biodiversity, and remains largely intact. The southwest and the west of the Amazon basin, stretching to the Andes, also contain largely intact forest. Foothills of the Andes contain the moist forests of Caquetá in Colombia, Napo in Ecuador, Ucayali in Peru, and the Southwest Amazon moist forest in Brazil and Bolivia. Biodiversity indices often cite the western Amazon in the Ecuadorian and Peruvian Amazon to be one of the most biodiverse regions of the world. 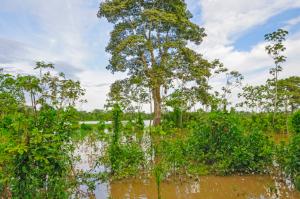 Throughout the Amazon basin, várzea forest is located along riverways and swamp areas seasonally inundated by freshwater. The Majaró várzea is found at the mouth of the Amazon river, and is influenced by freshwater downstream flows as well as tidal flows from the Atlantic Ocean. Further upstream is the Gurupa várzea, (lime colored, not labeled) stretching from the mouth of the Xingu River to Santarem at the mouth of the Tapajos River. Upstream of this lie the Monte Alegre and Purus várzea (magenta and purple on the map, respectively, not labeled). Varzea habitats are dominated by floods and river sediments: várzea refers to land flooded by nutrient rich whitewater from volcanic sediment of the Andes Mountains, along the Amazon River itself, while igapó refers to land flooded by nutrient poor blackwater rivers, such as the Xingu and the Tapajos in the south and the Rio Negro in the north. Vegetation in the várzea forest are defined by their position along the floodplain, where seasonal flooding reaches 4-7 meters. Low areas are savanna, where constant inundation favors grasses. At middle levels, periodically flooded wet forests are dominated by palms such as moriche palm Mauritia flexuosa and acai-palm Euterpe oleracea, while higher upland forests contain commercial timber species. Várzea regions are valuable habitat for hundreds of species of forest and aquatic birds, as well as caimans, river dolphins, and anacondas. Sediments from floods also enrich soil nutrients, and floodplains have traditionally been some of the most intensively farmed areas of the Amazon basin.

For more information about ecoregions, see– Encyclopedia of Earth–Brazil and WWF 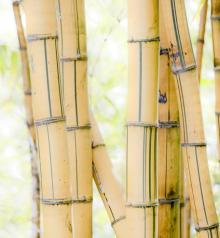 In the várzea, or floodplain forests, landscapes are highly modified by local populations. Studies by Yale F&ES graduates Robin Sears and Miguel Pinedo-Vasquez find that this management results in diverse assemblages of trees, wildlife, and forest fish. See their chapter from the book, Amazon Várzea.