The climatic history of the Amazon basin is relevant to understand the effects of climate on forest distribution and composition. South America originally formed part of the Gondwanaland supercontinent, connected with Africa and Antarctica. Just 2 million years ago, in recent geologic time, the Isthmus of Panama closed to connect the Americas (explaining part of the distinction in North American and South American flora and fauna). Tropical Amazon forest may have existed as early as the late Cretaceous (100-66 mya). Some propose that dinosaurs may have modified the landscape, and that extensive humid forest did not exist until the dinosaurs were replaced by smaller fauna and a greater percentage of frugivore seed dispersers, closer to the Eocene (56-34 mya). Global warming during the Eocene, combined with the formation of the Andes Mountains, created a maximum period of rainforest formation, resulting in speciation of many rainforest plants.  Although rainforests contracted from parts of southern South America, humid forest remained expansive throughout the Amazon basin into the Pliocene (5-2 mya). Climate fluctuations during the last million years in the Pleistocene caused periodic ebb and flow of humid forest and dry savanna. The Amazon refugia theory has been proposed to explain the area’s high biodiversity, where expansive savannas concentrated rainforest species into small areas, leading to speciation. Although today most agree that savannas were small in extent, some studies discover evidence of extensive savanna as recent as 2,000 years before the present.

After European colonization, it is likely that indigenous population crashes resulted in increased forest growth, perpetuating the virgin forest myth of the Amazon rainforest (see more- history of human settlement). In recent decades, however, deforestation and land use change threaten to disrupt the ecological balance of the Amazon forest as a whole. The Amazon dieback theory is a scenario where water stress, increased temperature, and other extreme climatic events cause tree death throughout the Amazon basin and a further increase in global carbon emissions. Fire and forest fragmentation could further exacerbate the Amazon die-back, as can dry conditions, as Amazon forests are vulnerable to drought. A study in Science (2009) found that the 2005 drought had a significantly negative impact on biomass growth, massively reducing the Amazon rainforest’s potential as a carbon sink. Areas particularly vulnerable to dieback are the seasonal forests of the southeast Amazon around the Brazilian state of Mato Grosso. In this area, a recent study discovered marked increases in fire which burned 5-12% of southeastern Amazon forest, resulting in significant ecological consequences. In other areas of the Amazon basin, selective logging is found to increase fire risk; regeneration is often impeded by lianas. 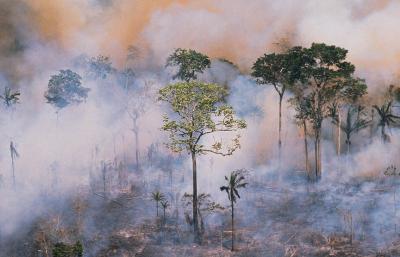 Early predictions forecasted grave scenarios for Amazon deforestation and subsequent dieback by the middle of the 21st century. However, recent studies have found that rainforests may be more resilient to drought and changing climate, and may continue to store carbon longer. Regardless, reducing deforestation and large fires will maintain carbon stocks and help in global climate regulation, a principle argument behind REDD+ conservation programs. In the Amazon basin, many groups now focus on climate adaption, or making forests and forest communities resilient to effects such as drought and flood. Many of these programs encourage food security and local production, increasing crop diversity, and agroforestry.

Tropical forest ecologist Daniel Nepstad (Yale Phd 1989) is a world renowned expert in Amazon forest ecology and climate interactions. With Woods Hole Research Center and IPAM, a Brazilian research institution, he has authored hundreds of scientific articles on forest ecology, and conservation in the Amazon basin. See an article about the Amazon dieback scenario at Royal Society. 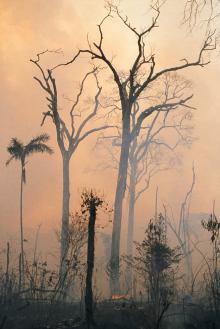