Forest Restoration in the Amazon region

Various forest restoration programs seek to restore native ecosystems in the Amazon basin. In the past, most programs focused primarily on plantations of commercial species such as rubber and exotic timbers, but many programs today focus on native species.

Throughout South America, timber plantations primarily use species of eucalyptus, pine, and occasionally teak. Much of the plantation wood was used as fuel for pig iron production and pottery; significant volumes of pulpwood are also produced from these plantations. Government incentives were used to stimulate the development of these plantations during the 1960s – 1980s, largely in the urban south around Sao Paulo and in the Andes of Colombia, Ecuador, and Peru. In the arid northeast of Brazil, Prosopis juliflora (algaroba) was commonly planted for wood and its edible beans. In the last few decades, however, ecologically oriented restoration projects have become more common. 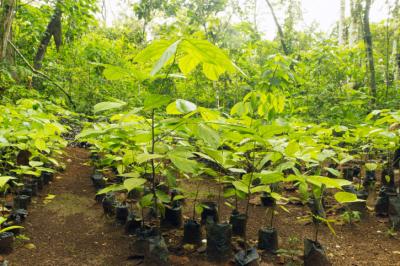 In the Amazon region, mining companies began to restore degraded areas using native species in the 1980s. These active planting projects are costly, however, averaging $2,500 / hectare. One study at a mine in Para, along the Amazon River, found that native plantings grow lower basal area and canopy height than commercial plantings, but retain a biodiverse secondary forest that may be more resilient as the forest undergoes succession. Numerous studies in the Rio Negro region of the northern Amazon basin find that forests regenerate rapidly following short term cultivation and burning, but that cattle ranching can slow forest regeneration significantly. Light seeded pioneer species are more likely to colonize a regenerating forest, but may be prone to drought and animal predation. Larger seeded species have greater survival but are less likely to be dispersed. Studies also find that pioneer species such as Cecropia and Vismia grow well in restoration plantings but that mid and late successional trees of mature forest often have trouble surviving. For these species groups, enrichment planting may be necessary, once an initial canopy has established.

Just outside of the Amazon basin, the biodiversity and threatened habitat status of the Atlantic forest make it a vital location for forest restoration science. Depending on what size and type of forest is measured, remaining forest cover estimates range from 7% to 16%. However, much of this remaining forest cover is found in small, isolated forest fragments, where species diversity is vulnerable and threatened. A study from Yale researchers in 2009 analyzed vegetation dynamics in secondary forest of southern Bahia; they found a rapid recovery in species richness but a slower recovery in forest structure (the size distribution of different trees in the canopy and understory, especially important for wildlife habitat). Other studies find that small, young forest fragments support trees with small, light seeds, but that trees with larger, heavier seeds such as members of Lauraceae and Myrtaceae, important for bird and small mammal forage, are only found in older forest plots. Restoration activities in the region focus on connecting these forest fragments, often located in riparian areas. Some restoration techniques used to facilitate tree species diversity include bird perches and top soil restoration. In Bahia, Brazil, and Misiones, Argentina, Yale researcher Florencia Montagnini works on restoration activities using rubber and eucalyptus plantation sites to facilitate native species, as well as shade plantations of yerba mate to combine biodiversity and sustainable livelihoods. Read more about Atlantic Forest restoration in Science and at The Nature Conservancy.

Nepstad, D., Uhl, C., Serrao, E. A., & Anderson, A. B. (1990). Surmounting barriers to forest regeneration in abandoned, highly degraded pastures: a case study from Paragominas, Pará, Brazil. Alternatives to deforestation: steps towards sustainable use of the Amazon rain forest., 215-229.

Yale’s Environmental and Training Initiative conducts capacity building for native species reforestation throughout the tropics. Learn about ELTI’s training and leadership programs and see their online database for tropical reforestation.