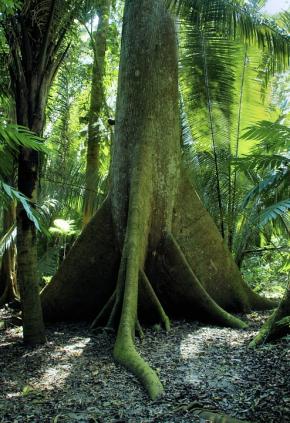 Roughly 15.74 million people live in Ecuador, with 63.5% in urban areas and 36.5% in rural areas. There are five Amazon states in Ecuador, comprising 13 million hectares. Together, these states (Morona-Santiago, Napo, Pastanza, Sucumbios and Zamora-Chinchipe) make up the Ecuadorian Amazon region, which is also known as the Oriente. The Ecuadorian Amazon contains only 2% of the entire Amazon basin, but this represents 80% of forested land in Ecuador. A total of 9.8 million hectares of forest covers 34.5% of the land area in Ecuador, which is a low percentage compared to other South American countries. Before major human impact, Ecuador was estimated to have 26 million hectares of forested land. Historically, deforestation occurred mainly in the Sierras and Costa region. In the mid 1900s, lowland rainforest was cleared for crop production. The majority of Amazonian deforestation in Ecuador’s Oriente began in the 1970s during the oil boom, as roads for oil exploration were expanding. While oil-drilling sites did cause some deforestation, it was the subsequent land settlement, agricultural expansion, and timber harvesting that followed the establishment of roads that caused a majority of deforestation. According to the Global Forest Watch, cumulative tree cover loss between 2001 and 2014 was estimated at nearly 600,000 hectares, indicating deforestation as a cause for concern in this mega biologically diverse country.

In 1981, the Forestry and Conservation of Natural Areas and Wildlife law (Ley Forestal y de Conservación de Áreas Naturales y Vida Silvestre) was created. The goal of this law was to outline the powers of the Ministry of the Environment regarding forest management, control, and research. Executive Decree No. 346 imposed extensive changes to the law in 2000, including the addition of basic principles for sustainable forest management. A number of other laws were issued in the early 2000s addressing biodiversity, deforestation prevention, and involvement of indigenous communities. Regulations addressing deforestation in particular include the Plan for Good Living law established in 2009 that sought to reduce deforestation by 30% by 2013, and the SocioBosque program that provides per hectare monetary incentives to landowners for conserving native forest. In 2012, the SocioBosque program had protected 1.1 million hectares of native ecosystems, including alpine páramo grasslands. However, the Ministry of Environment in Ecuador, which oversees the National Forestry Agency, is underfunded and in many cases is unable to conduct proper law enforcement. 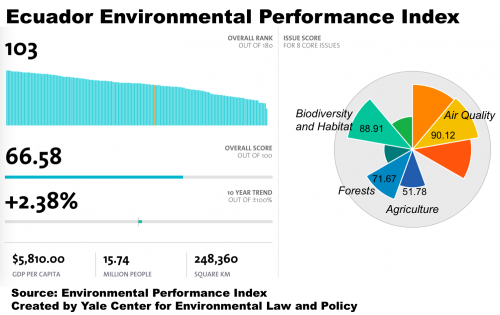 Legal harvesting is conducted under three types of permits that address cutting, harvests without mechanical extraction, and mechanized industrial extraction. However, a large commercial forestry industry is not prevalent in Ecuador. This could be in part due to these short-term logging permits that tend to dissuade permanent logging operations, and also due to difficulty of access in mountainous terrain and isolated areas. Certification is also not widespread in Ecuador, as only about 0.2% of forests were FSC-certified as of 2009. An interview-based study by Ebeling and Yasué in 2009 found that the limited success of FSC certification (see Forest Certification in the Amazon) in Ecuador is due to a number of factors. Government officials seem to be largely unaware of certification options, and in recent years there has been a high turnover of the government officials in the Ministry of the Environment and National Forestry Agency. Interviewees stated that while legal forest management guidelines are fairly well matched to FSC certification requirements, certification requires more meticulous planning and documentation, and there are no current tax incentives for forest managers to be certified. Forest tenure units in Ecuador tend to be small, only about 50 hectares, and land tenure and timber harvest rights are generally insecure. Once again, forestry laws are not enforced due to the lack of funding granted to the Ministry of the Environment, suggesting that illegal logging may be widespread.

The REDD+ program took root in 2009 when Ecuador joined as an observer. In 2011, Ecuador became a beneficiary country, and a national framework for the regulation of REDD+ activities, including all monitoring, reporting, and verification (MRV), is being drafted. Conservation in Ecuador is achieved through protected areas and national parks. The Cuyabeno Wildlife Reserve in the northeastern Ecuadorian Amazon is 603,380 hectares and is considered to be one of the most biologically diverse areas of the region. Forests in the Cuyabeno are periodically inundated, making for an incredibly unique ecosystem within the Amazon basin. The Cuyabeno is also home to a number of indigenous groups.

Yasuní National Park is Ecuador’s largest national park at 982,000 hectares, and was designated a UNESCO World Biosphere Reserve in 1989. It is one of the most biologically diverse places in the world, with staggering tree diversity (4000 estimated species), 597 species of birds, 150 amphibian species, 121 species of reptiles, an estimated 204 species of mammals, and nearly 500 species of fish. However, Ecuador’s second largest oil field lies under the northeastern region of the park, in the Ishpingo Tambococha Tiputini (ITT) oil fields. These oil fields have been a subject of controversy since 2007. After originally pledging to keep the oil underground in exchange for $3.6 billion from the international community, President Rafael Correa withdrew his proposal in 2013 after failing to receive sufficient funding for the Yasuní Initiative. The foreign community only contributed $13 million, and thus the Yasuní Initiative fell short of its $3.6 billion goal. In 2016, Ecuador began drilling at the edge of the intact rainforest of Yasuní. While only 1/1000th of the area of Yasuní would be exploited for further oil exploration, many conservationists, scientists, and indigenous peoples remain opposed to the plans.