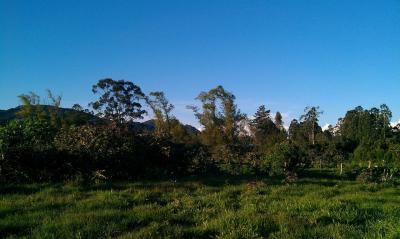 In a country of 46.3 million people, only a few million live in Colombia’s Amazonian states (Amazon and Orinoco). Colombia has a total land area of close to 111 million hectares, but the amount of forested area is still disputed. An FAO 2012 estimate claims that forested land covers 60.3 million hectares, while the Forestry Development plan reports 64 million hectares, and the World Bank estimates 48 million hectares. It is also estimated that a third of the total land area belongs to the Amazon rainforest alone. With such a high percentage of forestland, the country is also believed to contain 14% of the world’s biodiversity. The FAO reports that deforestation in Colombia has occurred at a rate of 101,000 Ha or 0.17% per year between 1990 and 2010, whereas the government reports a higher rate of 310,349 Ha or 0.48% per year for the same time period. However, a study by Terra-i and the O-Eco Info Amazonia team estimated that deforestation increased by 192% in the Caquetá region of Colombia in 2012, and study from the Colombian Ministry of Environment estimates that 140,356 hectares were lost in 2014, suggesting that efforts are still needed to curtail deforestation.

According to the Colombian government and the UN REDD+ program, there are 7 main drivers of deforestation (not in order of importance): 1) Expansion of agriculture and livestock; 2) illicit crops, such as coca used to make cocaine; 3) settlement, migration, and displacement of populations; 4) expansion of infrastructure related to energy and roads; 5) mining; 6) removal and extraction of timber; and 7) wildfires. Despite relatively low population densities in Amazon states, land clearing has been caused by settlement and migrations that were spurred by violence and FARC insurgency in the 1980s and 1990s. Recent oil exploration sites have also prompted direct and indirect deforestation. However, a number of these deforestation drivers, namely agriculture, infrastructure, and mining, have also played a role in shaping economic and national development of the country. 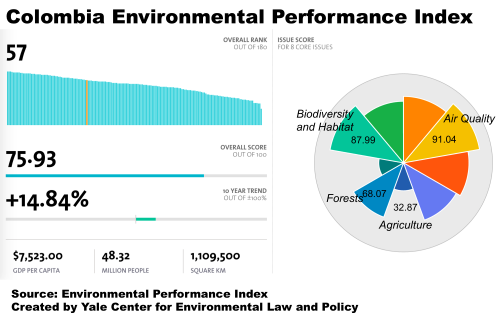 In past decades, the Colombian government has focused on this economic development. It was not until fairly recently that environmental protection became another priority for the government. In 2008, Colombia signed the “zero deforestation in the Amazon by 2020” agreement, and in 2009 Colombia began working with REDD+. However, it is estimated that only 0.31% of the GDP is directed toward preserving the environment.  Incentives for forest conservation stem from public subsidies and certificates that give tax exemption to forest owners. However, unlike in some Latin American countries, a Payments for Environmental Services (PES) program has only recently been emerging in Colombia. The government and public administration in Colombia is also the most decentralized in Latin America, with around 40% of government spending distributed by subnational governments, compared with about 15% in other Latin American countries. Therefore, it is local environmental authorities, called Corporaciones Autonomas Regionales (CARs) that have considerable power and impact in environmental discourse. In Colombia, the CARs in each jurisdiction are in charge of managing and administering natural resources, as well as granting forest concessions for timber harvesting. Given the decentralization of government within Colombia, REDD+ operates on a more decentralized and localized scale. It is the local authorities that play a more important role in decision-making, and in general the parties involved in REDD+ efforts are NGOs, the private sector, and the business sector. The REDD+ round table (Mesa REDD+-Colombia) was created in 2008 as a forum for discussing REDD+ issues, and member organizations include the World Wide Fund for Nature (WWF), Conservation International (CI), The Nature Conservancy (TNC), USAID, Corporación Ecoversa, and other private organizations. Indigenous peoples and organizations, such as The Organization of Indigenous Peoples of the Colombian Amazon (OPIAC) have also participated in Colombian REDD+ workshops and discussions, as well as international discussions on REDD+.

In 2009, an Intersectoral Pact for Legal Timber was enacted by the Colombian government and public and private sector organizations. The goal of the pact is to end illegal logging and improve forest governance as well as sustainable forest management. There are a small number of forestry operations in Colombia with FSC certification (see Forest Certification in the Amazon). In addition to sustainable forest management, organizations like The Nature Conservancy are working with the Colombian government to monitor deforestation and to improve protected areas (see Protected Areas in the Amazon). One such protected area, called Chiribiquete National Park, doubled in size in 2013 and currently comprises 2.8 million hectares.